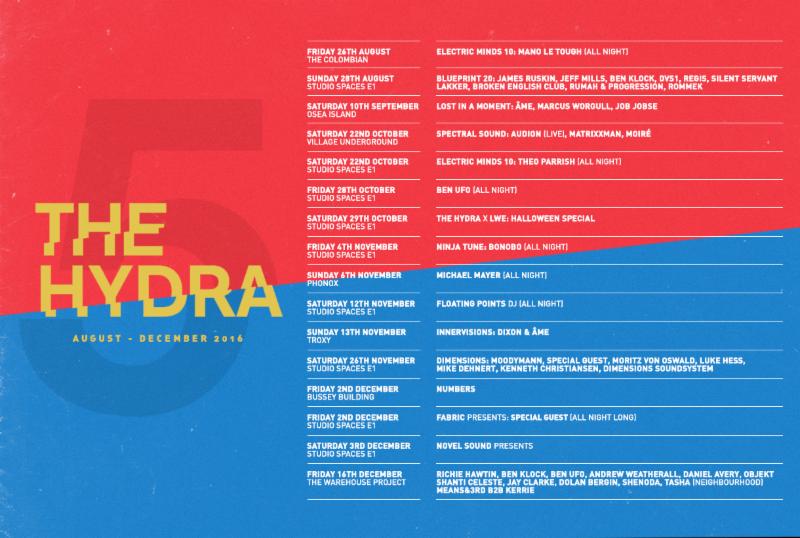 Celebrating five years at the cutting-edge of London's underground music scene, leading clubbing series The Hydra, announce their 2016 party schedule. Hosting regular events from August to December, their 2016 series will see a return to their nomadic roots, brining seasoned spinners and the brightest rising talents to some of London's best loved and most exciting music venues and beyond, including Theo Parrish, Dixon, Floating Points, Richie Hawtin, Bonobo, Moodymann, Ben Klock, Matrixxman, Andrew Weatherall, Jeff Mills and many more.

Promising to be their biggest season yet, a melting pot of house, techno, disco and all electronic oddities bubbles across the capital in the form of bespoke showcases, carefully curated special events and exclusive collaborations.

Having cemented a lauded reputation for all-night sessions from the industries leading music-makers, The Hydra push this concept further for 2016, with a plethora of special events across the season.

Kicking-off on Friday 26th August 2016, The Hydra join forces with sister brand electric minds with a musical journey of discovery from Mano Le Tough at The Colombian in Elephant & Castle, complimented by a custom-designed light-show from leading industry technician, Robert Tiefton, who is celebrated for his work with the likes of Innervisions and Panorama Bar.

A shooting star of international dance music, Ben UFO has carved a reputation for an ability to transform clubs solely through selection. The "DJ's DJ" will return to Studio Spaces on Friday 28th October to single handedly take dancers on a journey through time and crates, all night long.

Ninja Tune and The Hydra come together on Friday 4th November to bring acclaimed electronic maestro Bonobo to Studio Spaces for an all-night session that's sure to bring a road-block event to the East London venue.

Michael Mayer will deliver a Sunday session South of the river at Phonox on 6th November. Tacit knowledge from a decade immersed in DJ culture, the Kompact co-founder is a true maestro with a penchant for playing extraordinary and inimitable sets.

Having spent two seasons developing Studio Spaces E1, improvements to air-con and a souped-up Function One sound-system have seen the venue become one of London's best loved warehouse spaces.

Taking full advantage of this, Studio Spaces will host a selection of cutting-edge showcases with Dimensions' Soundsystem on Saturday 26th November. Having grown alongside Dimensions, the Hydra and electric minds have played host to many carefree voyages on the Adriatic Sea. The Dimensions Soundsystem showcase will offer a nostalgic journey back to the Croatian festival with Moodymann, Moritz Von Oswald, Luke Hess, Mike Dehnert, Kenneth Christansen selecting quality cuts of house, techno and disco.

Friday 2nd December sees a very special union as The Hydra join forces with clubbing institution fabric, for a rare escapade outside of their Farringdon home. Whilst the lineup remains a closely guarded secret, the combined musical acumen of the two clubbing meccas is sure to deliver one of the biggest events in the Capital this season.

Not content with just one show on 2nd December, The Hydra all join up with Southbound for a showcase of much loved label Numbers at Peckham party hot-spot Bussy Building.

The Hydra bring long-standing allies Innervisions to London on Saturday 13th November lead by venerated label stalwarts Dixon and Âme at the fore.

Spectral Sound head to intimate East London venue Village Underground on Saturday 22nd October for a night of rhythmic techno and disorientating grooves. Audion's live set, channeling the sound of Detroit and the darker side of Matthew Dear's musical talent the pair will be joined by the futuristic style of Matrixxmann and shadowy, hypnotic sounds of emerging talent Moire.

With plenty of surprise still to be announced for 2016, The Hydra's fifth season looks set to propel the series to new heights and secure their reputation as one of the UK's leading party brands.

TICKETS FOR THE HYDRA SERIES 5 AVAILABLE AT:
>>THE-HYDRA.NET<<