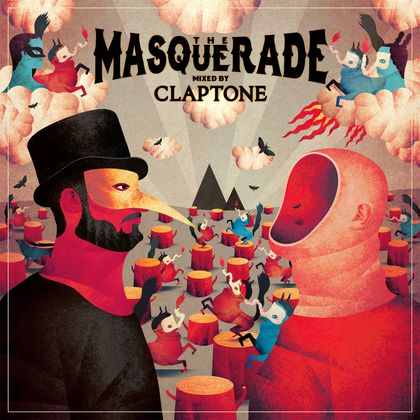 Claptone is a riddle wrapped in a mystery inside an enigma. But there is no denying the impact on the global groove made by this otherworldly artiste. Claptone constantly circles the planet, only landing to deliver communion at special gatherings of electronic music fans. Fans who often appear wearing a golden mask themselves to pay homage to his message; cloak yourselves in anonymity and lose yourselves in the music.

Performing no less than 280 times in 2016 in every country where people seek to dance for one fleeting night. The man with the golden beak played an endless list of festivals and clubs, had an amazing Ibiza season with Amnesia, Space and Pacha gigs and last but not least launched his very own "The Masquerade" event series in Berlin, Barcelona, Ibiza, London and New York. No doubt: Claptone has the world under his spell.
The clamour to recreate his nightly encounters with the crowds, his comprehensive club experiences and the joyous feelings of the first season of his own event has lead to the creation of "The Masquerade mixed by Claptone”. This collection of edits, classics, exclusives, remixes and stand out tracks from his DJ sets is split into two mixes: day and night. Claptone aims to enchant and beguile the listener as well-known and new songs appear to magically intertwine; originals become remixes become edits become samples become music. Contained within the mixes is a special alchemy that is exclusive and won’t appear anywhere else – Claptone is spoiling us.

Claptone:
"The night mix is one for your perfect club night at home or in the car, for having friends over or making new friends, for getting intoxicated without necessarily getting intoxicated. The day mix is the ice cubes in your cocktail, a cool shower for hot hours on the beach, your cushion for a nice siesta, your key to a sexy flirt or just that sexy flirt itself. Forget everything you think you know about DJ Mixes and listen closely when I create, combine, recreate and decompose. This is a joyride through house music and audible proof that this music has not lost its powers. On the contrary, my mix shows that the right sonic potion works better than any of these prescription drugs for when you need something to bring a smile back on your face and the sun back into your heart, believe me."

To celebrate the release of "The Masquerade mixed by Claptone", the masked man will take flight and perform around the world throughout the dark winter months. Go see him infect you with his groove, have him warm your heart, and experience him make the world a better place club by club on this tour.