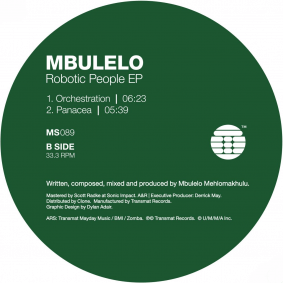 Growing up immersed in the deep and luxurious house music that dominates the airwaves in South Africa, 23-year-old Johannesburg producer Mbulelo has accepted the youthful challenge to invert the sound of his predecessors, and he succeeds splendidly on his first release for Transmat, The Robotic People EP.

Encrypted with African rhythms and production structures, the record’s four tracks rewire the core of techno and broken beat to deliver beats that challenge even the most sophisticated DJs and dancers. No wonder Transmat founder Derrick May—always an advocate for shaking up the dance floor—has embraced these obtuse grooves.

Mbulelo is the latest electronic music prodigy to be given a global platform on the Transmat imprint, placing him in the ranks of future greats like Carl Craig, Stacey Pullen and Aril Brikha. His eager experimentation caught the ear of Transmat founder Derrick May, who heard echoes of his own youthful sonic adventurousness as Rhythm Is Rhythm in Mbulelo’s fearless use of staccato beats and surprising synths.

The four tracks you hear on the EP were hand selected by May from an album’s worth of tunes delivered by Mbuelo in an eruption of creativity. “Orchestration” opens with stuttering kicks and snares that slide in and out of lockstep with clanging African percussion and a spectral police siren that reminds listeners of the tough urban terrain of Jo’burg that, like Detroit before it, gives its creative souls an edge over those fortunate enough to emerge from more cosmopolitan backgrounds.

The title track shifts gears to a spacious groove that breaths gently in panning stereo while “Origins” quickens the pulse with a synth vibrato so sinister that it doesn’t need to raise the volume in order to raise the hairs on your arm. And closer “Panacea” offers the relief implied in its name with swaying wood and chime hits that tap out an alien code.

By rewriting the musical language inherited from his home, Mbulelo proves that there are still new forms of aural audaciousness that electronic music can take.