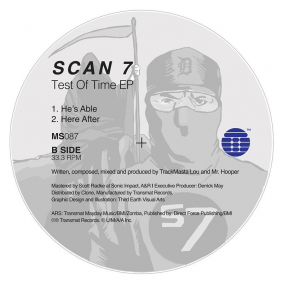 The history of Detroit music is rich with artists whose inspiration grew from the dichotomy of religious communion and secular concerns. Saturday nights at the club and Sunday mornings in church is a way of life for generations of Motown musicians, and the fusion of the two has given rise to some of the city’s most venerated talents—soulful saints from Aretha Franklin and Marvin Gaye to Elvin Jones and George Clinton.

But it’s not just legends of the past who have infused their worldly works with spiritual sounds. Many of Detroit’s most prominent techno producers of today have also been touched by the gospel spirit, including Trackmaster Lou and his colleagues who make up Scan 7. Having emerged as lieutenants in the fierce sci-fi political milieu of Underground Resistance in the early 90s, they have added a new source of righteous energy to power the unit’s latest release, the Test of Time EP.

The EP features four tracks moved by the sound of Detroit’s ministries. “Sunday On Saturday” captures the duality perfectly, both in the title and within the grooves, featuring a bouncing house beat that bursts open with the addition of a swelling organ melody at the halfway point. That same organ appears on “Here After,” but with the fluid playing replaced by an exuberant single phrase that swings with the slow burning beat. “He Is Able” adds a riotous preacher sample into the mix, making for a complete sermon on the dance floor, while “So B It” does without any of the overt denominational signifiers while still instilling reverence into its synth pads.

The EP serves as an indicator that the seven in Scan 7 has always represented G, as in God Almighty (as wells 3+1+3 = 7). It’s also a reminder of Scan 7’s ability to craft meaningful music that transcends mere techno to touch all of those whose devotion directs them onto the dance floor.