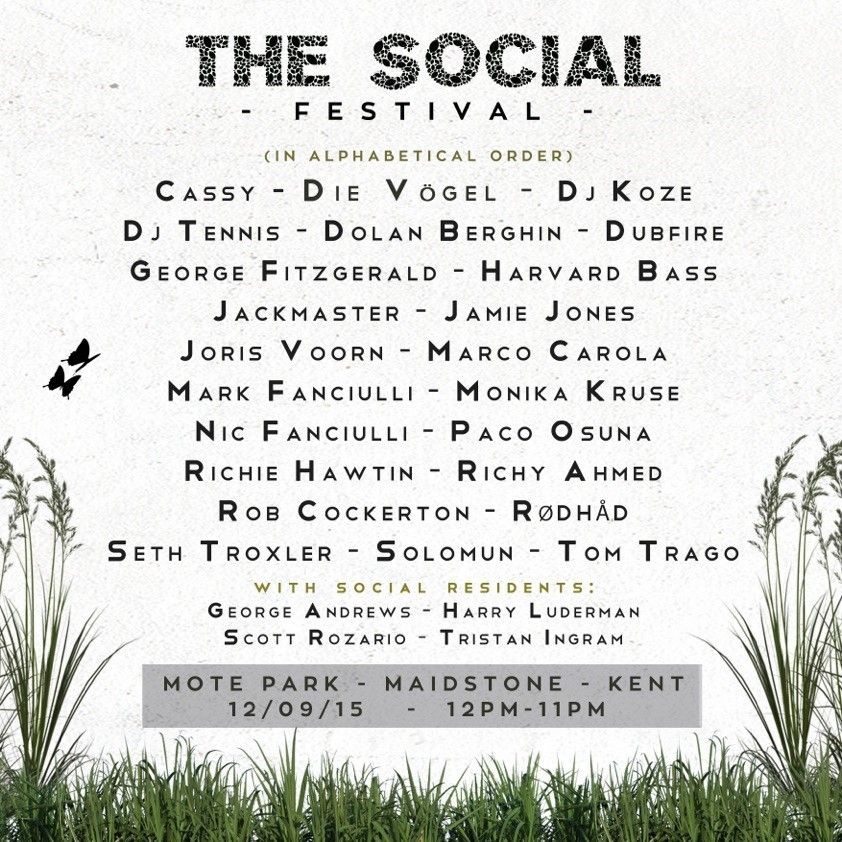 After huge phase one and two line ups, The Social festival have revealed their third and biggest line up announcement yet.  Arguably one of the biggest names in techno today, Richie Hawtin will be heading up the bill at Mote Park in September, adding to an already stellar line up. A true pioneer, Hawtin is widely regarded along with Carl Craig to have created the sound that informed the second wave of Detroit techno. His performance at The Social festival is set to be a masterclass of skill, formed over an illustrious career, spanning over 20 years

Joining the undeniable legend Hawtin, is a modern hero of dance music, George Fitzgerald. In his comparatively short career, the Berlin resident has already hosted his own Residency show on BBC Radio 1, released on the likes of Hotflush and Aus music, and started his own label, Man Make Music. Coming off the back of his debut album, ‘Fading Love’, released April 27th through Domino Recordings, Fitzgerald’s set comes at a defining moment in his already hugely successful career.

As a member of genre-defining duo Deep Dish, Ali Shirazinia aka Dubfire produced a huge catalog of hits, even winning a Grammy along the way. His decision to go solo however was about experimentation. His culmination of underground, dark rhythms and sheened production prowess have led to a fruitful solo career away from his old projects, being known for incredibly seamless DJ sets and versatile, effortless techno cool.

After over a decade in the game, Cassy is a true British electronic music powerhouse. Specialising in the most groove-woven sounds of house and techno, Cassy moved to Berlin in 2003, where she appears at the famous Panorama Bar regularly, as well as releasing on the likes of Cocoon, Osgut Ton and Perlon. Joining Cassy is a genuine experimentalist in the form of Koze. Not content with sticking to one genre, Koze’s DJ sets are wall to wall house and disco extravaganzas, all spliced together with a hip hop mentality that stems from his early years in the German hip hop scene.

Closing phase three’s line up is Electric Minds head Dolan Bergin, bringing with him the same vibes that have made his nights a resounding success in recent years, as well as Kent’s own Rob Cockerton.

The Social Festival will be the perfect opportunity to sign off the summer with an intimate and memorable musical experience.