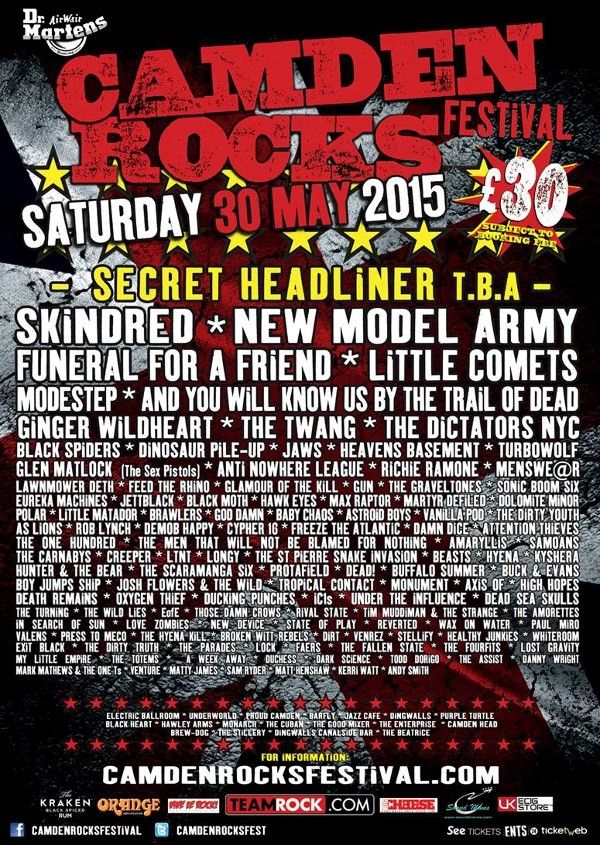 The line-up for 2015’s Camden Rocks festival has got even bigger, with names including Newcastle indie trio Little Comets, genre-hopping party starters Sonic Boom Six and more joining in the fun. With acts including Skindred, New Model Army, Funeral For A Friend, Little Comets, Modestep, …And You Will Know Us By The Trail of Dead, Ginger Wildheart and hundreds more, Camden Rocks 2015 is set to be the biggest yet – with tickets just £30 +booking fee.

Camden Rocks takes place on Saturday 30th May across the historic music venues and pubs in North London’s Camden Town for a day of rock, metal, punk, indie and all out musical mayhem. Sonic Boom Six will be showing a different side to their sound this year, with singer Laila K saying: “After killing it last year at Camden Rocks, we cannot wait to do something a little different this year with our acoustic set. We’ll be featuring stripped down versions of all the classic Boom songs, as well as a couple of cheeky covers to get you bouncing.”

Little Comets frontman Rob Coles is excited to return to Camden for the festival: “We’ve done so many brilliant gigs in Camden over the last couple of years that it is great to be part of a festival in such a vibrant and knowledgeable place for live music.”

Camden Rocks have booked a huge secret headliner for the festival and loads more massive names are still due to be announced!

With more big names, including a very special secret headliner still to be announced, Camden Rocks is a steal with tickets are priced at just £30 + booking fee, available now from: www.camdenrocksfestival.com.