The Magician and Julian Perretta - Tied Up (Remixes) 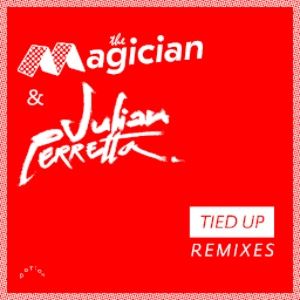 The Magician and Julian Perretta - Tied Up (Remixes)

Following the release of 'Tied Up', Belgian DJ and producer The Magician has announced a remix package for the collaborative track with Julian Perretta. Featuring an edit from offaiah, Kideko and a Balearic dub, the three reworks will be released on the 5th May via Ministry of Sound Records.

Kicking off the package is offaiah's deep, rumbling rework of the original melodic track. Adding crashing synths and a gripping tempo, the track is given an ominous attitude fit for peak-time sets.

The Magician then returns to his Balearic roots with a dub version of the track, perfect for sunsets on the beach. Driven by a rolling groove, he turns 'Tied Up' into a laidback beat, echoing Julian's soaring vocals and keeping his signature piano melody.

Released in February, the original version is an emotive piano-led single and has already amassed over 4 million plays on Youtube and Spotify combined. 'Tied Up' marks the first release since The Magician signed with B1 Recordings, Ministry Of Sound and Ultra Records for a worldwide deal with Sony Music, further cementing his international success.

The Magician is an artist whose commercial achievements goes hand in hand with years of experience in the underground side of the electronic scene. His first EP, 'I Don't Know What To Do', came out via revered French label Kitsunê, before he went on to find widespread recognition from his remix of Lykke Li's 'I Follow Rivers'. This remix now stands at almost 80 million streams on Spotify and reached #1 in five countries and #2 in four. After a number of successful productions via FFRR and Parlophone — including the huge Europe-wide hit with Years & Years, 'Sunlight' — he founded the aptly named Potion label and event series on which he released last year's successful single 'Shy'.

Aside from his steady production schedule, The Magician has played a diverse range of clubs; Pacha, Space, Ushuaia and Amnesia Ibiza, Coachella, Output New York, The Warehouse Project and Amsterdam's widely respected, now-defunct Trouw to name a few. With his Potion series, he has brought showcases to Ministry Of Sound, Showcase Paris, Exchange LA, Electric Brixton, New York's Webster Hall and more.

This year, The Magician has a hectic touring schedule ahead of him with several festival performances including a Potion takeover at Tomrrowland, a tour across America and returning to his Balearic home, Ibiza for several dates at Pacha