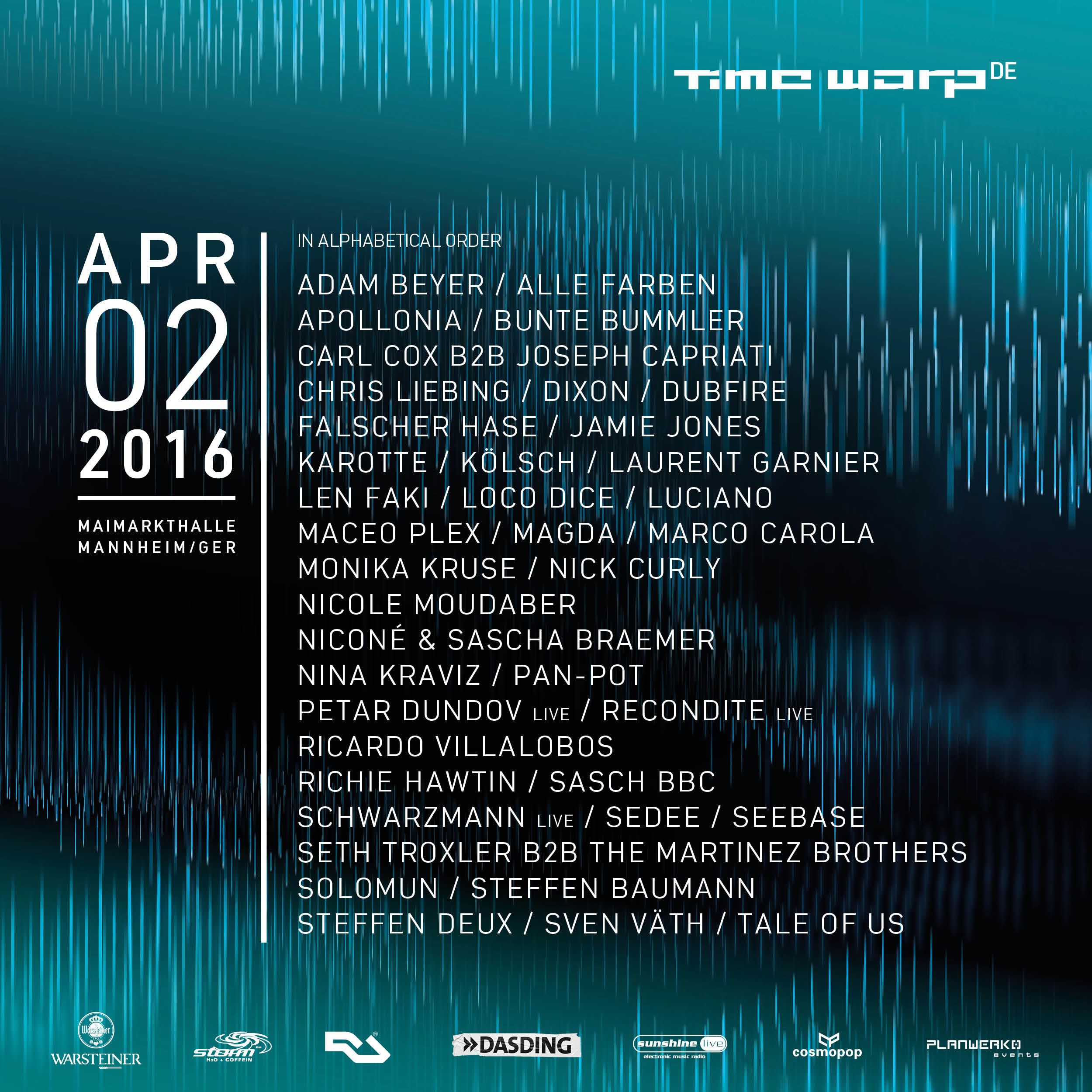 Time Warp Mannheim 2016 is just around the corner and the line-up is a typically impressive assembly of world-class DJs and live acts, featuring longstanding Time Warp fixtures and a number of debut performances. Titans of the techno scene such as Sven Väth, Richie Hawtin, Laurent Garnier, Carl Cox in a special B2B with Italian tech don Joseph Capriati and Ricardo Villalobos will return in full festival effect while Solomun, live duo Schwarzmann (Âme and Henrik Schwarz), Kölsch and Apollonia will all grace the phenomenal stages of Time Warp for the first time. With lighting design and production values of the highest order, Time Warp Mannheim is the ultimate festival experience for techno aficionados and needs to be seen (and heard) to be believed…

On 2 April 2016, the 22nd year of the  flagship event will take place. Once again Mannheim will be turned into a city entirely centred on techno, with Time Warp expecting 17,000 visitors from all around the world. With a long history that has seen some changes, Time Warp has grown up from underground warehouse parties, to the current festival mecca Maimarkthalle in Mannheim – seemingly custom built for the occasion! One aspect that hasn’t changed a jot from the festival’s inception in 1994 is the organiser’s dedication to giving its visitors a unique experience that year upon year upholds its super high standards across curation, execution and production. Not to mention the line-up, with Time Warp widely regarded as a family get together for artists who have shaped the European techno scene since day dot. 2016 is no different with returning heavyweights Chris Liebing, Marco Carola, Nina Kraviz, Jamie Jones, Monika Kruse, Seth Troxler B2B The Martinez Brothers, Adam Beyer, Pan-Pot and many more.

Besides this close knit family who return year in year out, the Time Warp team also make savvy selections for their annual inaugurations. Diynamic boss Solomun is a welcome addition to the fold, an artist who has left an indelible mark on the scene via his Hamburg based label and Neon Nights / Diynamic Outdoor events around the globe. Also celebrating their debut will be the live duo Schwarzmann aka Henrik Schwarz and Frank Wiedemann of Âme. Both hugely talented live acts in their own right, their recent collaboration has created a great deal of heat in techno circles. Also debuting on the live front is giant of the Croatian scene Petar Dundov and back again is Berlin’s live heavyweight Recondite.

Among the returning DJs are Maceo Plex, who came 2nd in this years RA DJ poll, just ahead of Time Warp devotees Tale Of Us, and only admitting defeat to the unstoppable Dixon, returning once again to deliver another immaculate set that will no doubt display why he’s the people’s DJ of the year for the third time running. Along with the International headliners, German scene linchpins and local heroes such as Nick Curly, Bunte Bummler, Sasch BBC, Steffen Deux, Sedee, Steffen Baumann and Seebase will represent the sound of Mannheim. All together the line-up consists of 40 unmissable artists that will wreak havoc with the party agendas of Time Warp’s annual pilgrims.

Tickets for the event are priced at 65€ and are available via the website www-time-warp.de. Travel partner www.festticket.com offers additional packages with hotel stay inclusive, starting at only 99€ – the quicker you act, the better the deal. Don’t sleep!