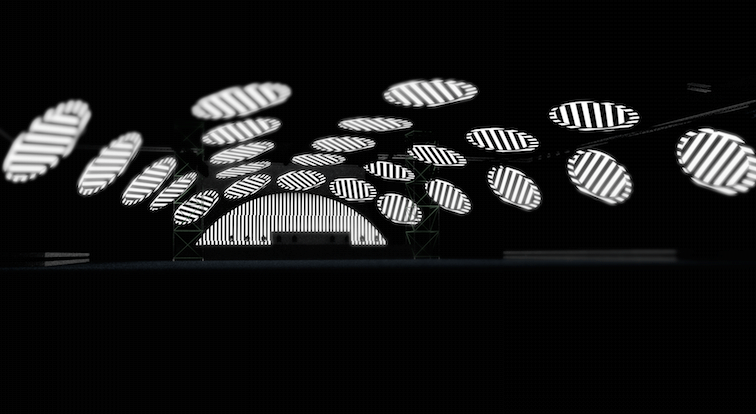 Marathon celebrations are all set for 25 October with a top-class line-up, several thousand visitors and extravagant stage design. For one night only, the artist and sculptor Tobias Rehberger will conjure up a canopy of vinyl in the Mannheim Maimarkthalle.

50 circumnavigations of the sun, half a century, over 4000 gigs in 33 years, disco, wave, techno, EyeQ, Harthouse, OFF, Dorian Gray, Omen, Love Parade, Cocoon: All of that and much more is inextricably linked with the name Sven Väth. His stamp has been left on Frankfurt and Ibiza; his musical mark extends across almost all continents. On 26 October 2014 this man, who influenced a generation’s attitude of life, will turn 50.

As is to be expected for night owls, the party will start on the eve of his birthday, on 25 October 2014.  The Mannheim Maimarkthalle will be transformed for the celebrations by Tobias Rehberger. The sculptor, one of the world’s most important contemporary artists, is a close friend of Sven Väth. Some time ago, Rehberger developed a design for Väth, which is based on vinyl records. In cooperation with the Portuguese artists‘ collective Dub Video and the Mannheim Event Management Company Cosmopop, the signet of the record will now become stage decoration: “The vinyl record, Sven’s instrument, tool and medium of expression, will be brought to visual life through video” is how Rehberger described his concept.

The Sky of Records is the second cooperation between Sven Väth and Tobias Rehberger. For Väth’s 30 Years DJ Celebration in 2011, Rehberger designed the Tour-Jet, with which the musicians flew to his summer gigs. The vinyl record was also the determining design element for this: “Thousands of records in the air, so that everything appears a little weird and a little different – so that people’s perceptions are displaced. That is, I believe, what Sven has created in the last few years with his music” stated Rehberger in the accompanying storybook “Music is in the Air”, which documents the design of the aircraft.

The birthday boy himself has naturally come up with something very special for his birthday bash: Väth will perform twice: from 1-4am and from 7:30-10am. Sven Väth: “On the night, a few musical highlights from the last 20 years will be on the decks”. Also on the turntables that evening will be Väth’s long-standing companions Richie Hawtin, Luciano, Alex Azary und DJ Koze.

The event will be presented by another birthday boy of the German Techno scene: Time Warp. The connection between Sven Väth and Time Warp often produced the stuff of legends and even now everyone is still talking of him shouting out “Guden Laune”. Following on from the Time Warp’s 20 Years anniversary celebrations in April, the doors of the Mannheim Maimarkthalle will open again on 25 October, to celebrate another memorable moment in electronic music history with Sven Väth and his colleagues.