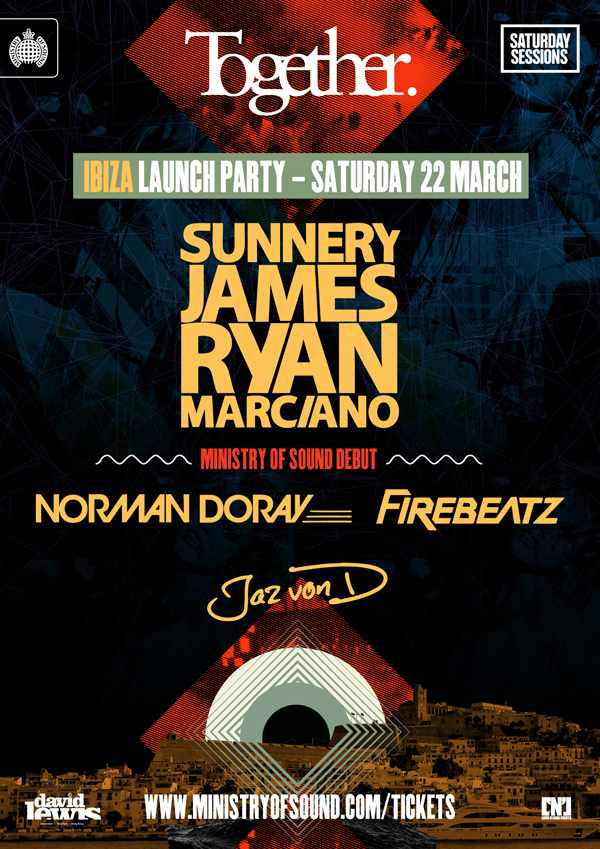 Together, will host an exclusive launch party at Ministry of Sound on Saturday 22nd March to herald their return to Ibiza in 2014 with a 16-week residency at Amnesia.

The Together Ibiza Launch Party will see Dutch house duo Sunnery James & Ryan Marciano making their Ministry of Sound debut in The Box together with Norman Doray, Firebeatz and Jaz Von D.

Sunnery James & Ryan Marciano are one of the hottest DJ teams currently in house music. Last season, their chunky house-based grooves found favour in Ibiza via their incredibly successful Sexy By Nature residency at Booom! Ibiza, in addition to outstanding performances at South West Four, Ultra, Tomorrowland, Electric Daisy Carnival and BPM. They’ve also been rewarded with one of the world’s highest profile residencies at Las Vegas’ Hakkasan, a headline show at The Heineken Music Hall in Amsterdam, as well as a BBC Radio 1 Essential Mix earlier this year. Besides their carnival-like performances, a key part of their success is their trademark production with standout tracks including ‘Tribeca’, their remix of Tiesto’s ‘Lethal Industry’ and the upcoming release on Musical Freedom, ‘Circus’.

Joining them on the night will be longstanding Ibiza favourite Norman Doray. After establishing himself with his uplifting, vocal house, Norman was quickly noticed by the industry’s leading figures such as Axwell, Avicci, Laidback Luke and Dirty South and quickly became a regular on the White Isle. He has suppported Swedish House Mafia, Erick Morillo, David Guetta, Avicci, Dimitri Vegas & Like Mike and Steve Angello on his ‘Size Matters’ tour, Following releases on Size and Le7els amongst others, Norman’s efforts have recently been rewarded with a residency at Las Vegas superclub LIGHT and three Essential New Tunes by BBC Radio 1’s Pete Tong.

They will be joined by Dutch duo, Firebeatz, who play at Ibiza’s Pure Pacha party and have released a string of high profile tracjs on Size, Defected and CR2. Their latest collaboration with Martin Garrix ‘Helicopter’ on Spinnin’ has reached number one on the Beatport chart.

103 will be hosted by the incredibly popular Pukka Up, famed for their Ibiza boat parties, with Double Cream, DJ Fab and Rockwell Noize taking to the decks.

Together will once again provide a full sensory overload as London sets the pace for what can be expected from the night’s residency in Ibiza.