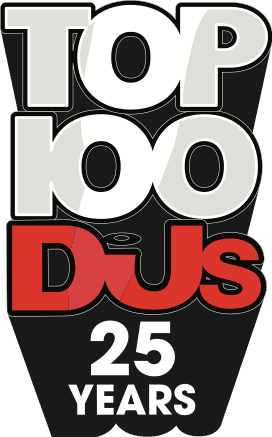 This year marks the 25th anniversary of the Top 100 DJs poll. As part of this landmark year, DJ Mag have a series of epic historical content to release in the run-up to what is set to be the largest turn-out for the poll yet. As part of this landmark year and to celebrate the 25th anniversary of the landmark poll, DJ Mag will be running a 25-day social media countdown starting on 25th September.

Each day they will be releasing a piece of nostalgic Top 100 DJs content to represent each year since Top 100 DJs was founded in 1993. On the 25th day (Saturday 20th October), the winner of the 2018 Top 100 DJs Poll will be announced at the prestigious awards ceremony during Amsterdam Music Festival (AMF) in Amsterdam.

The Top 100 DJs poll was first launched in 1993 as an editorial list to celebrate the 100th edition of DJ Mag. However, it wasn’t until 1997 that DJ Mag decided to make the Top 100 DJs a publicly-voted poll. That same year a fresh-faced Carl Cox scooped the award. What followed was a succession of newly crowned champions in Paul Oakenfold (2x), Sasha, John Digweed, Tiësto (3x), Paul van Dyk (2x), Armin van Buuren (5x), David Guetta, Hardwell (2x) and Dimitri Vegas & Like Mike — all of whom remain some of electronic music’s most successful DJs. Fast-forward to the present day and the poll is spearheaded by a new two-time winner, and the undeniable face of a new generation of DJs, Martin Garrix — who was the youngest ever World’s No.1 DJ.

DJ Mag itself has been one of the largest and loudest voices in dance music since its arrival into the scene in 1991. Since then, and with the poll an integral part of its yearly schedule, DJ Mag has always been on top of the current state of dance music culture and the industry as a whole. Without a shadow of a doubt, this poll is the most talked-about poll in dance music and the winners reflect the current zeitgeist of the youth voice in dance music year on year.

Notably the poll has always attracted voters who hold the mainstream and commercial acts high in their favour, so the poll never fails to put forward what the youngest entrants into the dance music culture are excited about.

Across its 24 previous winners the Top 100 DJs Poll has spanned the length and breadth of the electronic music sphere, from Carl Cox to Tiësto to David Guetta and Martin Garrix, proving that the poll is representative of the growth — or decline — of dance music scenes, reflecting the ebb and flow of genres as new sounds and scenes take hold and spread

Over the years more than 25 of the world’s most renowned female DJs have appeared in the poll. Names include Lisa Lashes, Sister Bliss, Magda, NERVO, Krewella, Alison Wonderland, Anne Savage, Sonique, Lottie to name but a few. This year the industry itself noticeably has more female DJs on all line-ups across the genres, and so the poll results are set to reflect a greater visibility for female DJs who’ve been making waves over the past year.

From headlining shows around the world to sold-out stadiums and countless record sales/streams to winning some of the biggest and most sought-after accolades in music, each and every artist that has topped the Top 100 DJs poll since it became a public voting system has left an unquestionable footprint on the culture of dance music. Today the Top 100 DJs has become a global event, annually drawing in excess of 1 million votes, making it the biggest publicly-voted music poll in the world. It has continually evolved alongside the ever-changing face and sound of dance music, by way of the voters’ choice for their selected winners, a statement backed up by the shapeshifting entries the poll has seen year-upon-year.

You can win an ultimate VIP Top 100 DJs experience by entering the UNICEF charity prize draw via: djmag.com/top100djsvip