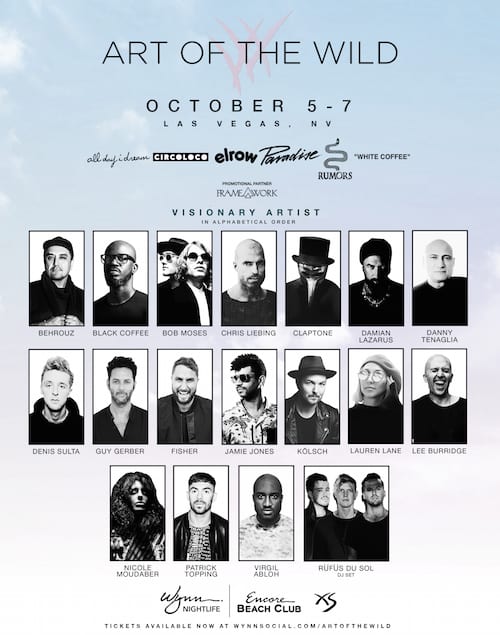 Beginning Friday, Oct. 5, Encore Beach Club guests can enjoy fun under the sun with poolside sounds provided by Lee Burridge & Bob Moses at All Day I Dream. The event, which originated on a Brooklyn rooftop in 2011, has since become an international sensation spurred by Burridge and his partner Matthew Dekay. By night, Australian DJ group RÜFÜS DU SOL will bring their signature sound to Encore Beach Club at Night with a special appearance by Luttrell.

The series will continue Friday evening at XS Nightclub with Circoloco – one of the most sought after party brands in the world. Since its launch in Ibiza in 1999, Circoloco has become a symbol for underground dance music culture keeping the spirit of house and techno music at its core. The Circoloco event will feature sounds by Damian Lazarus, Chris Liebing, Kölsch and Denis Sulta.

On Saturday, Oct. 6, Encore Beach Club will host elrow, featuring performances by the elusiveClaptone, Fisher, whose latest track “Losing It” has reigned #1 on the Beatport charts for the past month, and joined by elrow residents Bastian Bux, and Toni Varga. Hailing from Barcelona, the iconic party elrow is famed for producing an arena of music and color.

That evening, Wynn Nightlife resident Jamie Jones will bring back his celebrated Paradise party, featuring international talents Nicole Moudaber and Patrick Topping. Having garnered global acclaim year after year, Paradise continues to deliver an unrivaled party utopia, serving as one of the most sought-after events in the world of dance music. Paradise is currently in its seventh season at its Ibiza home of DC10, where Jones spent his summers on the dance floor before getting behind the decks.

Guy Gerber’s Rumors has spread globally to host events in London, Tel Aviv, Sardinia, Mykonos, and Miami, and on Sunday, Oct. 7 will add Las Vegas to the list at Encore Beach Club. Known for his collaborative album with Diddy and the launch of his career at Ibiza’s renowned Pacha, Gerber will be joined by Danny Tenaglia, Behrouz, and Lauren Lane for a one-of-a-kind event.

Concluding the weekend series, Wynn Nightlife resident Black Coffee will bring his take on deep house to XS Nightclub on Sunday night. The South African DJ and producer has become one of the biggest stars of the global electronic music scene, reaching double platinum selling status with his multi-award winning album Pieces Of Me. Joining on Sunday night will be Virgil Abloh, the producer/DJ who is the Artistic Director of Louis Vuitton’s menswear collection as well as Chief Executive Officer of Milan-based label Off-White.
Purchase tickets for Art of the Wild here.

For the full lineup of “Art of the Wild” events at Wynn Las Vegas, please see below:

All Day I Dream with Lee Burridge and Bob Moses