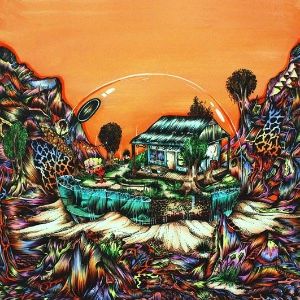 Directed by Daniel Craig (Matsu Photography) and filmed on location in the band’s hometown of Fremantle at the iconic Mojos Bar and surrounds, the striking visual sees the band switch places with an unsuspecting crowd to comical affect.

Koi Child recorded their debut record at Mangebong, on an island south of Perth. Featuring 14 tracks filled with warm dubby chords, wandering bass lines, crunching drums and masterful lyricism, it doesn't take long for Koi Child to usher us deep into their own brand of magical hypnosis.

"We recorded the album in a little house on an island which included a nerve wracking river crossing on a boat, with a large amount of loaned recording gear. The shack-turned-recording studio made for a really nice vibe: swimming in the river, recording vocals in the kitchen, sinking an ungodly amount of tinnies and encounters with giant weirdo spiders.” says Tom Kenny (keys) of the recording experience.

Tom adds, "Kevin taught us so much about production and songwriting. His mixing brought so much life and glow to tracks we’d heard a thousand times. We’ll be forever indebted to him for being so generous with his time, creativity and talent… what a bloke.”