Transahara returns to the Sahara Desert in 2022 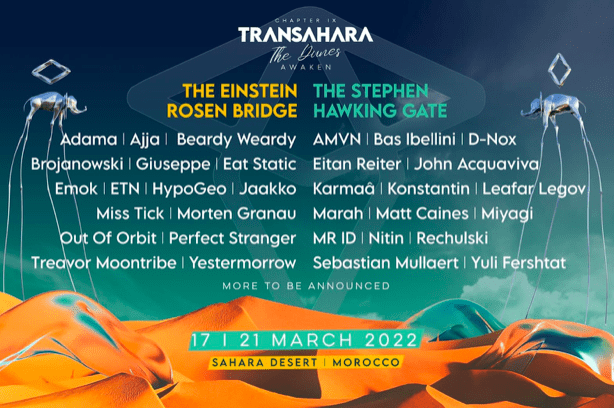 Transahara returns to the Sahara Desert in 2022

by ihouseuadmin
0 comments
Tickets: https://www.dunescandance.com
Date: 17th – 21st March, 2022Facebook | Instagram
Transahara, the festival hosted at the location of Hollywood films The Mummy, Gladiator and Prince of Persia, will be soundtracked by Sebastian Mulleart, Bas Ibellini, D-Nox, John Acquaviva, MR ID and more
Transahara is the most authentic and original desert festival in the world. It is a magical musical oasis in a dried-up Moroccan lake in the shadow of a mysterious sand dune that you normally only find deep in the Sahara desert. It plays out near the city of Merzouga from the 17th to 21st March 2022 and coincides with the equinox, a very special and spiritual moment that marks the passage from winter to spring, darkness to light, meaning you will simultaneously see the moon setting and the sun rising on the same breathtaking horizon. It boasts three carefully curated stages, including The Einstein Rosen Bridge which will be headlined by Adama, Aija, Beardy Weardy, Brojanowski, Eat Static, Emok, Guiseppe, and The Stephen Hawking Gate, headlined by Sebastian Mulleart, AMVN, Bas Ibellini, D-Nox, Eitan Reiter, John Acquaviva, Nitin, Miyagi, Konstantin, MR ID and many more.
This majestic desert landscape has a mystical atmosphere where the sands of time pass slowly, the seductive silence of the dunes soothe the soul, and the infinite horizons empty your mind. It is steeped in Arab-Berber culture and is famous for its vibrant colours and exotic foods. It is a true desert paradise where many iconic scenes in Hollywood films like The Mummy, Gladiator, Lawrence of Arabia, James Bond and Prince of Persia: The Sands of Time have been filmed, where Jean Michel Jarre performed one of his most legendary live shows and where, in time, Transahara will be Africa’s very own Burning Man. Transahara started way back in 2002. Initially, it was a low-key coming together of music lovers with a small budget and a big dream. Rather than chasing corporate sponsorship and racing to sell hundreds of thousands of tickets, it simply grew at a steady rate. Some years, there wasn’t even a festival at all. The music and the experience were always most important, rather than doing an event for the sake of it. But now, Transahara is ready to return and make its mark again. ​​
For five days and four nights only, this ancient location will become a mixing pot of cultural exchange, artistic expression, and world-class house, psytrance, chill out and techno. There will be three stages with their own cultured look and feel. They will act as inter-dimensional and inter-musical portals to different worlds and have music playing non-stop between them.
There will be a real interplay between sounds and scenes because the desert is where psytrance was born. It is also the beating heart of the so-called desert house sound that has become so popular around the world. At Transahara you will be able to get the most authentic mix of spiritual sounds, desert grooves and transcendental moods in the world. DJ sets will be carefully curated so that they all add up to storytelling musical journeys. Live music, traditional local bands and stunning acoustic sessions will also feature, as will a host of special after-parties.
The names bringing the world class sounds include deep techno don Sebastian Mulleart, cult tech house figure Bas Ibellini, enduring techno pioneer John Acquaviva plus a range of contemporary tastemakers including D-Nox, Eitan Reiter, Nitin, Miyagi, Konstantin, Adama, Aija, Beardy Weardy, Brojanowski, Eat Static and many more. 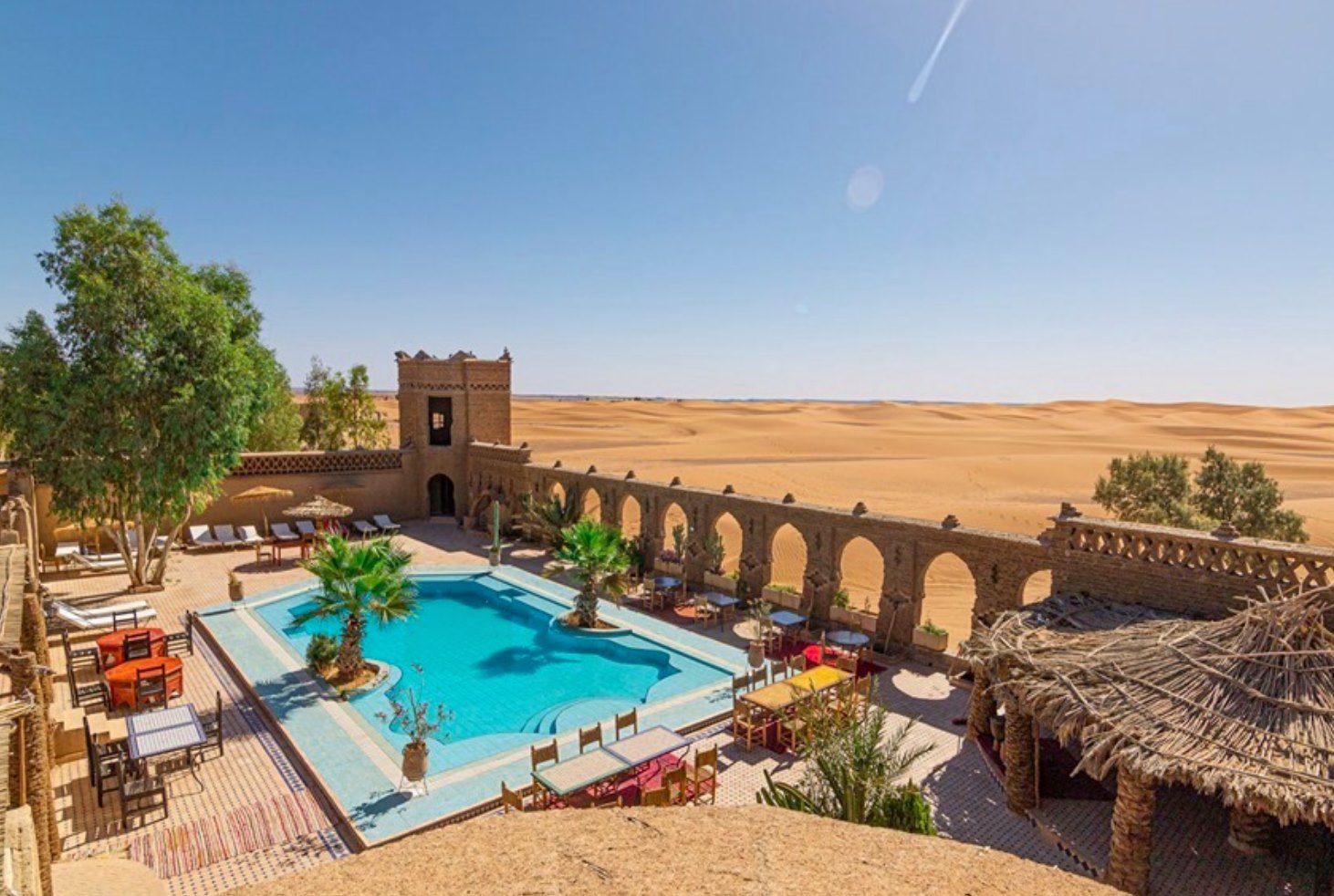 Transahara is for people from all over the world on all sorts of budgets. Accommodation is as close as 400m or only as far as 3.5km away in the rich array of local hotels, campsites and bell tents that will suit all tastes. This means travelers from all over the world will be able to plot their own journeys, share their stories and add to the unique atmosphere of this unique desert gathering. 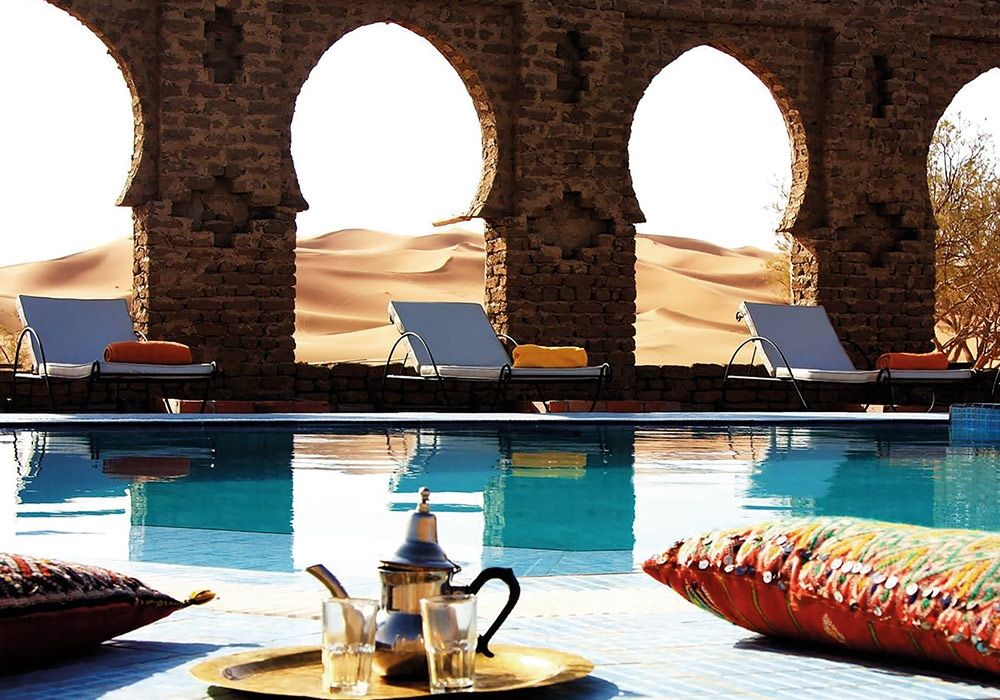 In the coming months, there will be details of specially organised day trips to the local towns and historic sites which include the bustling markets of Marrakech, camel treks and UNESCO World Heritage villages. A whole wellness village with a wealth of local customs, cultures and healing treatments will also be unveiled, with an extensive range of art installations also set to pop up across the site to make it an even more sensory-stimulating experience.
Transahara will transport you into a desert world like no other. It will be a genuine escape from everyday life. An eye-opening, unforgettable mix of music, culture, and art with open-minded people from all over the world.
Phase 1 Lineup (More to be announced):
The Einstein Rosen Bridge (Stage)
Adama
Ajja
Beardy Weardy
Brojanowski
Giuseppe
Eat Static
Emok
ETN
HypoGeo
Jaakko
Miss Tick
Morten Granau
Out Of OrbitPerfect StrangerTreavor Moontribe
The Stephen Hawking Gate (Stage)
AMVN
Bas Ibellini
D-Nox
Eitan Reiter
John Acquaviva
Karmaa
Konstantin
Leafar Legov
Marah
Matt Caines
Miyagi
MR ID
Nitin
Rechulski
Sebastian Mullaert
Yuli Fershtat 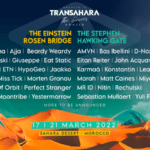