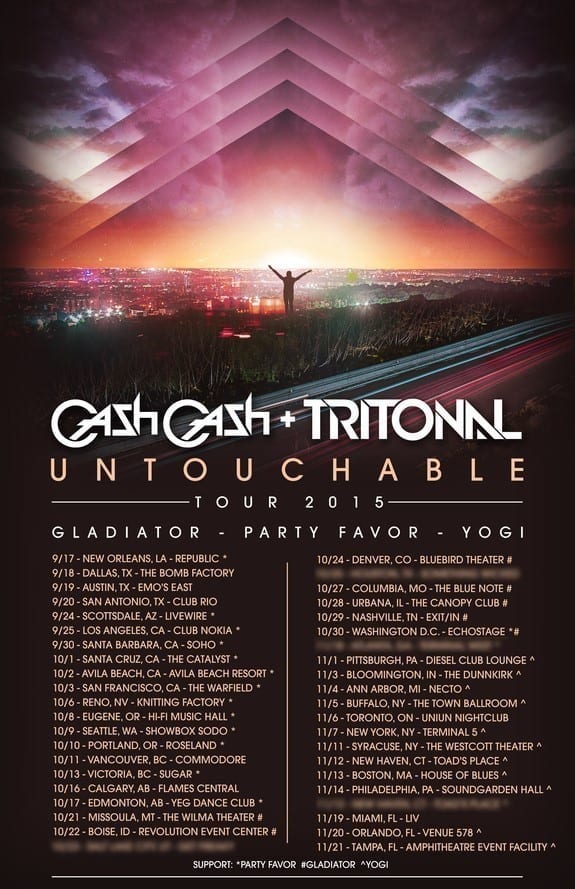 Ramping up the anticipation even further, both camps today drop a brand new teaser video for the tour, featuring an as-yet unidentified remix of “Untouchable”. Whether it’s been produced by Chad Cisneros and Dave Reed of Tritonal, Jean Paul Makhlouf, Alex Makhlouf and Samuel Frisch of Cash Cash or by someone completely independent still remains to be seen, but the roaring, rollicking, rampaging recut looks certain to do some serious damage on dance floors up and down the country and across the world in the next few weeks.

With Yogi, Party Favor and Gladiator on support across selected dates, the Untouchable Tour kicks off on September 17th in New Orleans, stretching right the way across the entire Fall season until the curtain finally drops in Tampa on November 21st. The tour diary currently stands at an incredible 38 events – but eagle-eyed fans will spot straight away that the official flyer includes more blurred-out dates, meaning they could be looking at a jaw-dropping 42 city run from these two rising titans of the new American dance music generation.

For more information on how to get tickets to an Untouchable Tour event near you, plus details on pre-sale and VIP ticket options (while supplies last) and additional date confirmations, visit  www.untouchabletour.co

Texan duo Tritonal have come a long way since 2011’s explosive debut album ‘Piercing The Quiet’ produced eight Top 20 Beatport hits – including an impressive five genre #1s. Chad Cisneros and Dave Reed’s swift rise has seen them build the leading Enhanced Music imprint with Will Holland, demolish the global festival circuit, establish a huge Vegas residency at Marquee, sell over 100,000 units of their globally acclaimed Metamorphosis EP series and launch their Tritonia radio show, consistently ranked as one of the Top 10 music podcasts on iTunes. Supported by the planet’s biggest artists – Armin van Buuren, Above  Beyond, Tiesto, Hardwell, Dada Life, Nicky Romero, Ferry Corsten and Pete Tong among them – Tritonal were hand-picked by MTV for their 2013 ’10 Artists To Watch’ list. In the past year alone the pair have amassed three Billboard Top 10 Dance Chart hits, scored an iTunes Dance Chart Top 5 with their Tritonia compilation, remixed for Hardwell, Zedd, Armin and Adam Lambert, deal with a tour diary more packed than the departure board at JFK International and in between all that, found time to go into the studio to work on a brand new album, penciled for release early 2016.

An internationally praised electronic act, Cash Cash, comprised of best friends and brothers (Jean Paul Makhlouf, Alex Makhlouf and Samuel Frisch) are hailed for their infectious dance-pop original tracks, vibrant remix productions as well as their energetic live DJ sets on festival mainstages and clubs spanning across the globe. Cash Cash emerged from the start with global recognition and support from renowned DJs and peers, including Tiesto, Hardwell, Zedd, Nicky Romero, captivating dance music insiders and friends along the way. Their hit song “Take Me Home” featuring Bebe Rexha has gathered over 50 million Spotify streams, over 20 million YouTube views, and Gold certification in the United States; while latest single “Surrender” has peaked at #36 on the Top 40 chart, the trio’s second #1 song on dance radio. Currently in the studio working on new music, the guys are working with Busta Rhymes, Fitz & The Tantrums, Capitol Cities, Christina Perri, and more.