Trnsmt: After The Party… Is The After-party! 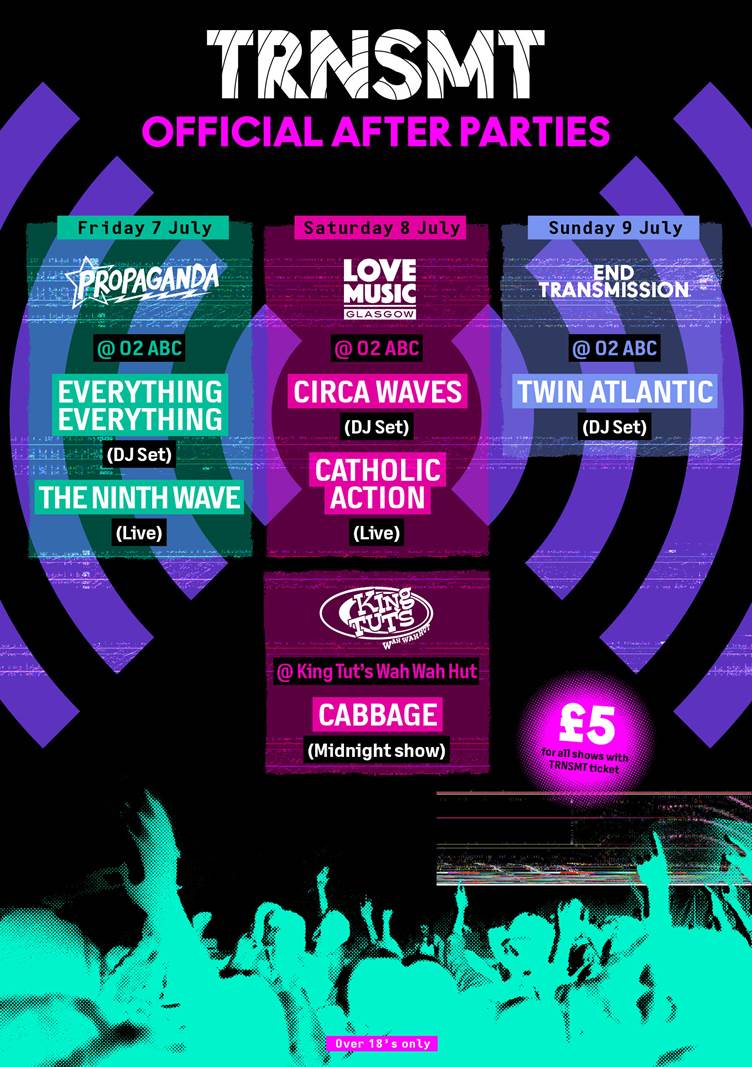 Trnsmt: After The Party… Is The After-party!

TRNSMT fans you don’t have to go home but you can’t stay here! Don’t worry though, we’ve got it covered, with exclusive after-parties every night of the festival with some of the hottest up and coming acts in the country, including a midnight show with Cabbageat King Tut's Wah Wah Hut on Saturday 8th July and DJ sets with Everything Everything (7th), Circa Waves (8th) and Twin Atlantic (9th) at O2 ABC, Sauchiehall Street.

Full details of line-ups below, get your tickets from www.TRNSMTfest.com:

Fresh from an electric set at Parklife, Cabbage’s intimate show a King Tut’s Wah Wah Hut is set to be an unmissable end to Saturday night.  Whilst DJ sets from Everything Everything, Circa Waves and Glasgow’s very own Twin Atlantic will have fans finishing the night on a high, under the iconic disco ball on the O2 ABC dance floor!

Details of all things TRNSMT can be found on our exciting new app which is available for free download on Apple and Android, as well as revealing the first of all the delicious street food vendors who will be at the festival. You can download the app via Apple (apple.co/2rtX83R) and Android (bit.ly/2qBq0nn) links.

Fans can also get a glimpse of the festival site with our TRNSMT map. Set to take over one of Glasgow’s much-loved parks, TRNSMT’s Glasgow Green home will house brilliant stages of music and thousands of fans over three days this summer.

Click HERE for the full TRNSMT line up, including the Main Stage, King Tut's Stage powered by Utilita Energy, the Jack Rocks Stage, and all travel and accommodation information.
HOTEL PACKAGES

TRNSMT have a number of accommodation packages available so no need to worry about where you rest your weary head after the gig. There are some amazing deals on offer from more affordable options to 4-star luxury rooms in the heart of the city. trnsmtfest.com/tickets/hotel-packages&nbsp;

Those travelling from the north of England can take advantage of £35 bus ticket deals from the festival’s official transport partner, Big Green Coach. Return journeys from Newcastle, Middlesbrough and Sunderland offer the delights of Glasgow and TRNSMT, in just over 3 hours travel time. www.biggreencoach.co.uk/events/trnsmt-tickets-coach-travel-glasgo…

On Friday 7th July, fans will descend on Glasgow Green to witness a full-length performance from one of the most iconic and influential bands of all time: Radiohead.  Their long-awaited return to Glasgow is highly anticipated and fans looking to catch Radiohead should secure their TRNSMT ticket now; with the band’s dates in Manchester and at Glastonbury sold out, TRNSMT is your only chance to see them in the UK this summer.

Across the TRNSMT weekend fans can relive their musical heritage with Radiohead and Belle and Sebastian, rock with the best in the business in Kasabian and Biffy Clyro, catch future festival headliners in The 1975 and Catfish and the Bottlemen, and discover their favourite new artist at the King Tut’s Stage powered by Utilita Energy.