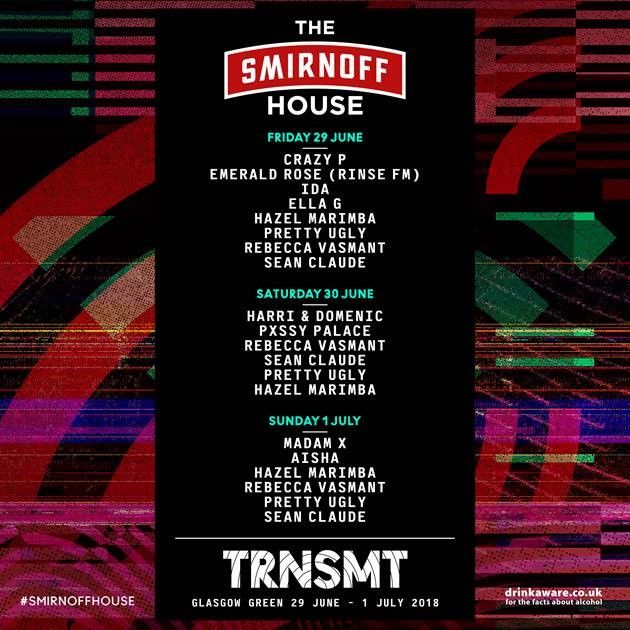 With less than a month to go until Scotland’s premier music festival TRNSMTtakes over Glasgow, the festival has today announced the return of one ofTRNSMT 2017’s many highlights, #SmirnoffHouse. Hosting unmissable performances from the best local and international DJs, #SmirnoffHousevisits TRNSMT from 29th June – 1st July.

TRNSMT is the ultimate destination for music fans this summer as it extends to two weekends of world-class music; from 29th June – 1st July plus 6th and 8th July with headliners Stereophonics, Liam Gallagher, Arctic Monkeys, Queen + Adam Lambert, and The Killers. The five day extravaganza features Arctic Monkey’s only UK festival appearance following the release of their record-breaking sixth album, plus the debut of rising stars like Tom Walker, Sigrid, Pale Waves, Anteros, Dermot Kennedy and many more.

Kicking off the #SmirnoffHouse party at TRNSMT is local Glasgow DJ Sean Claude, jazz-queen extraordinaire Rebecca Vasmant plus Glasgow’s longest running, and most popular, club night Pretty Ugly. Hailed as one of the best live dance shows on the planet, Crazy P bring their late 90s’ soul, house and disco vibes to TRNSMT’s opening night, blending shining pop moments with the best of underground disco. Famous around the world for creating one of the longest running club nights ever, Harri & Domenic play the #SmirnoffHouse on 30th June, meaning their Subculture party will be THEplace to be on a Saturday night in Glasgow. Credited with rejuvenating the Manchester dance scene, Madam X plays #SmirnoffHouse on Sunday 1st July, expertly blending grime with garage, dubstep with funk and always leaves her crowd wanting more.

#SmirnoffHouse will serve delicious drinks throughout the weekend, including the signature fresh Smirnoff Soda Fruit Smash which, paired with unmissable sets from Smirnoff DJ’s, makes #SmirnoffHouse a truly unique addition to TRNSMT 2018.

Tickets on sale NOW from www.TRNSMTfest.com