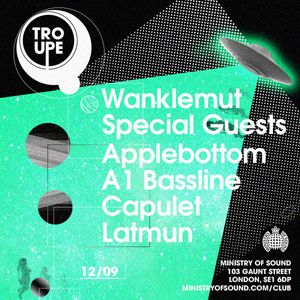 Troupe arrives at Ministry of Sound on Saturday 12th September 2015 featuring ‘My Head Is A Jungle’ producer Wankelmut, together with Capulet, Applebottom and A1 Bassline.

Berlin-based producer, Wankelmut will be taking control in The Box main room. Breaking through with his remix of Asaf Avidan’s ‘One Day/Reckoning Song’, which sold 1.5 million singles worldwide and was Beatport’s most downloaded track of 2012, Wankelmut has remained a major player in the house scene with a steady flow of seminal tracks and remixes, including 2013’s ‘My Head Is A Jungle’ with Emma Louise.

Troupe themselves will be represented by an appearance from founders Capulet. After releasing their debut EP on TRPRCDS in the summer of 2014, Capulet have seen support from the likes of AME and Citizen. The party promoters also run the eponymous Troupe Records, which sources some of the UK’s hottest, up-coming house music talent.

Rounding off the bill will be Troupe artists Applebottom and A1 Bassline with a Troupe Records Showcase in 103 with Latmun, Mr Prince, Wahl, and LRB.