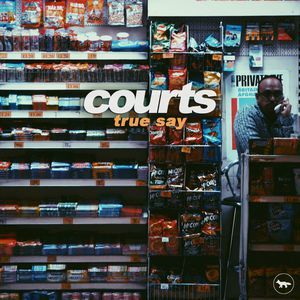 Courts announce their new single True Say out May 26th via Kitsuné Records, which is the second single to be taken from their forthcoming debut EP. This bouncy yet melancholic single follows the release of their previous offering ‘Any Of Us’.

Courts are a five-piece band from Basildon, Essex made up of Chris Moody, Dan Baker, Joe Choppen, Luke Baker and Reece Baker. With inspiration deriving from disco, hip hop, indie and beyond, Courts’ sound lends itself to the influence of the Stone Roses, Mac DeMarco, and The Streets. Fans of the band include Zane Lowe and Nile Rodgers.

Courts made their first introduction to the music scene with their debut single ‘Part Of’, and critical acclaim soon followed. The chant-worthy chorus lead to tastemaker support from the likes of Line of Best Fit, Clash, The 405, Indie Shuffle, Earmilk, and more.  The track was then hailed as Zane Lowe’s last ever ‘Next Hype’ on Radio One. Success and acclaimed reviews followed up with the releases of ‘Sanatana’ and ‘No Lie’, reaching its apogee with Elton John’s support on Beats 1 for ‘Glass Half Empty’. They are immediately noticed on talent diggers Kitsuné’s radar, adding uplifting anthem ‘Feel My Love’ to the Kitsuné Maison 18 compilation, released last November.

View this email in your browser COURTS TRUE SAY SINGLE OUT NOW LISTEN HERE: https://play.soundsgood.co/playlist/true-say-courts "This band is doing about a million things right" Stereogum "This band has every quality needed to become the next big phenomenon in music” MTV Debut EP coming 16th June 2017 Soundsgood Embed code: