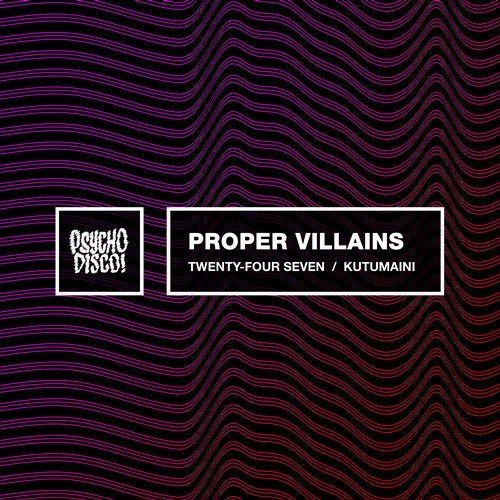 In 2018, Atlanta-based house music purveyors Psycho Disco! have added a number of club-geared releases to their discography, including EPs and singles from LA Riots, Craze, Golf Clap, Treasure Fingers, Codes, Gettoblaster,and more. For their next act, the label is ready to unveil one of their most exciting releases to date- a new EP from veteran producer Proper Villainstitled 'Twenty-Four Seven / Kutumaini.'

His first release after a three-year hiatus, Proper Villains  is a New York artist renowned for his original releases and remixes including Cataracs' "Bass Down Low" that landed radio play on Power 106 and Hot 97. He has also been commissioned for remixes for Enrique Iglesias, Dev, Havana Brown, Pitbull, Lil Jon, and Far East Movement, as well as indie favorites Roger Seventytwo, and Childish Gambino.

For this long-awaited return, out now on Psycho Disco!, the two-track scorcher features lead single "Twenty-Four Seven" that fuses hip-hop fundamentals with a breakneck bassline and a tribal-esque rhythm. For the project's B-side, "Kutumaini," Proper Villains delves deep into the house music trenches with a nearly seven-minute epic that reinforces the tribal undertones of the EP with a hypnotizing vocal loop, multi-layer percussion, and a sweltering synth melody that adds the final touches to the dance floor stunner.

If Psycho Disco! has caught your ear, be sure to check out the Psycho Disco! Miami Music Week Showcase. Going down March 22nd at Miami Beach's Townhouse, the event will also feature DJ Pierre, Todd Terry, Treasure Fingers, Codes, Golf Clap, Alexander Technique, Lupe Fuentes, Funk Manchu, Aaron Lainez, and back to back sets by Sly Turner and Westend,E.R.N.E.S.T.O and Hunter Reid, Devon James and Will OB. Going down from12pm-10pm, entry to the event is free with RSVP to http://PSYCHOMIAMI.EVENTBRITE.COM