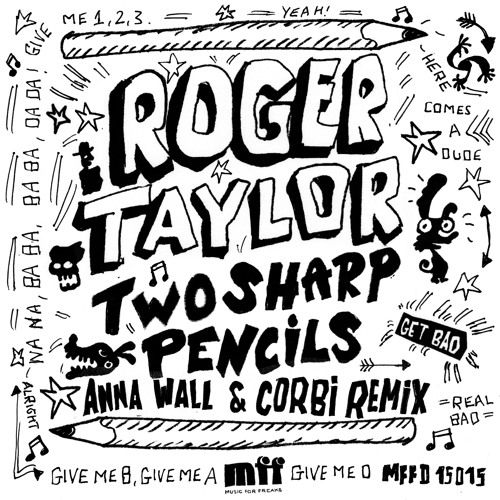 Anna Wall & Corbi’s take on Queen drummer Roger Taylor’s ‘Two Sharp Pencils (Get Bad)’. The result? One of the most unlikely and essential party records of 2017.

Queen and house music: not necessarily the most obvious of bedfellows, but Music For Freaks has never been a label to take the path most travelled. Over the course of their decades long journey the label founded by Luke Solomon and Justin Harris has released uniquely idiosyncratic dance music, establishing the label as a go-to imprint for those seeking imaginative, unpredictable records that still undeniably work on the dancefloor.

Their latest release might well be among the most out-there of them all.

Originally released back in 1984, ‘Two Sharp Pencils (Get Bad)’ is a record by Queen drummer Roger Taylor, featuring him on vocals as well as drums, bass & guitar. Now brought bang up to date via a fully official and endorsed remix courtesy of Anna Wall & Corbi, this overlooked album track looks set to become one of the summer’s most essential records.

Born and bred in the UK, Anna Wall is a DJ, producer and label owner who is a key player in London’s underground house music scene. Her label The Bricks champions up-and-coming producers, while Anna herself has DJ’d all over the world, most recently for Mixmag at Pacha for their IMS launch party.

Corbi is an Ibiza-based DJ and producer, A&R for the highly respected FINA Records and co-founder of Melon Bomb, a party and DJ collective that has in the space of just a couple of years become one of the White Isle’s most talked-about exports.

Having met while working at house giant Defected Records some years ago, Anna felt that Corbi would be the perfect studio accomplice to work on the remix of ‘Two Sharp Pencils’.

“I was honoured to be asked to remix Roger Taylor. It felt right to work with Juan as we have a really great workflow, and he’d just released his first single on my label The Bricks.  We made it at his home studio in Ibiza and were absolutely inspired by our surroundings.” Anna Wall

The remix of ‘Two Sharp Pencils’ is about as far away from a run-of-the-mill house record as its possible to get. Full of character, unexpected turns and moments of joyful brilliance, it’s every DJs dream: a statement record that will illuminate every dancefloor and stage at which it is dropped.

“It was a great project to work on with my good friend and producer Anna Wall who had managed to get hold of the stems of this Roger Taylor track. We retained all the parts we loved and then added extra drums, synth parts and textures, really trying to stay faithful to the vibe of the original.” Juan Corbi

The package also includes an additional version from Chicago’s Jamie 3:26, who adds disco guitar licks and claps – as well as incorporating additional vocals – for his Punk Funk version.