UEFA and David Guetta says ‘Thanks a Million’… 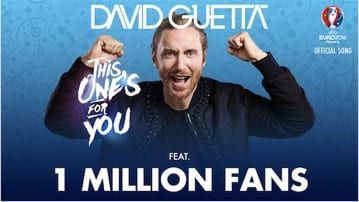 UEFA and David Guetta says ‘Thanks a Million’…

UEFA and Global DJ and music producer David Guetta has today confirmed that over 1 million fans have recorded with him as part of his official song of UEFA EURO 2016.

In December 2015, UEFA’s EURO 2016 music ambassador called on fans of music and football to unite and record a chant via a special online application created by UEFA. The fans recordings have now been mixed together and will feature in his official UEFA EURO 2016 anthem ‘This One’s For You!’.

“Thanks a Million to everyone who recorded with me – it really is a collaboration like no other! I wanted to try something very special and put the fans at the heart of the UEFA EURO 2016 song. When I asked 1 million fans of music and football to record with me I didn’t know how they would respond but the support from all over the world has been amazing. Now I’ve just got to mix them!!” said Guetta.

‘This One’s For You!’ will be released this spring and will be performed by David Guetta at the UEFA EURO 2016 opening and closing ceremonies and at a free concert in central Paris on the Champ de Mars underneath the Eiffel Tower on 09 June. The song will also be integrated throughout the tournament, including the opening and closing sequences for every TV match broadcast. The fan recordings will also feature as part of a special goal celebration music edit that will be played in stadiums every time a goal is scored. Meaning that fans from all over the world will be helping to create a unique atmosphere inside of the stadiums.

UEFA Marketing Director Guy-Laurent Epstein added: “We knew there was a major connection between music and football because of their common DNA, which is to trigger strong emotions in people, but what this really shows is just how powerful that connection is. David Guetta is one of the most followed music producers on the planet and this collaboration has given fans from all over the world the opportunity to play their part in creating what will be a very unique atmosphere at this year’s tournament. This year’s EURO will be biggest ever, featuring 24 teams and will be followed by over 2 billion fans. It’s really special to be able to say that over 1 million of these fans also helped to create this song”

UEFA EURO 2016 kicks off on Friday 10 June at 21:00 CET when France play Romania at the Stade de France in Saint-Denis. The official song, produced by David Guetta, will be released in May and is available for pre-order now.

Since 2007 he is the artist of superlatives with global recognition, with 55 million fans on Facebook and 4 million followers on Instagram. With a sales career of 9 Million albums, 40 Million singles, 2 billion streams on Spotify, 4.3 billion official views on YouTube, he was awarded no less than 23 times by the music industry.