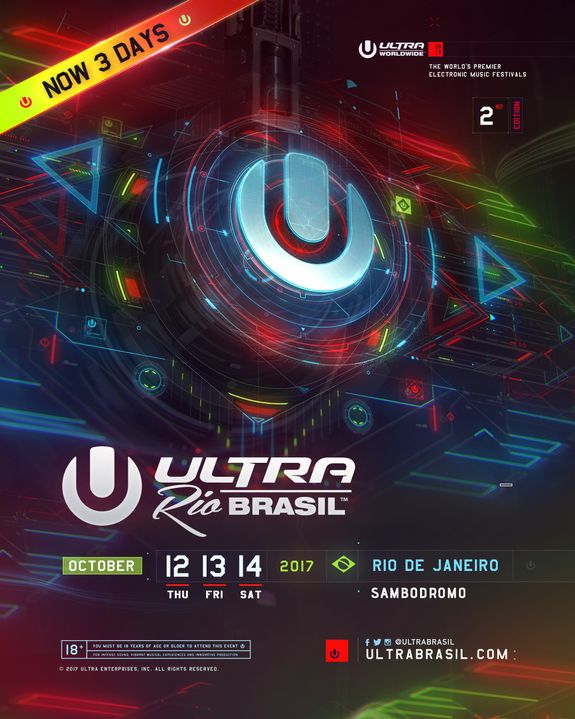 Following an incredible SOLD OUT debut event in October 2016, the world’s most international festival brand confirms that ULTRA Brasil will return to Rio de Janeiro in 2017, expanding into a full-blown THREE-DAY affair!

This October 12, 13 & 14, 2017, ULTRA Brasil will once again take over Rio de Janeiro’s iconic Sambódromo, most famously known as the home of the city’s annual carnival. Following in the footsteps of ULTRA’s flagship Miami event, the 2017 event will mark Ultra’s first three-day festival on the South American continent.

The inaugural ULTRA Brasil saw a staggering 60,000 fans flock downtown to sell out the Sambódromo across two days last October. With unprecedented demand for tickets expected yet again, organizers have made special moves to increase the size and capacity of the venue, and improve the layout.

With both ends of the Sambódromo now open to all attendees, ULTRA Brasil 2017 will welcome a brand new Ultra Village and an Ultra Boulevard to the site, full of new activations, food stalls, bars and shops. As ever, all three custom-built stages – MAIN STAGE, RESISTANCE and UMF RADIO – will also receive extra-special upgrades to both design and production.

ULTRA Brasil will be implementing an easy-to-follow registration process for 2017. Registration will open on Monday, January 23 and will close on Sunday, January 29, giving die-hard fans the opportunity to put themselves at the front of the ticket queue when tickets officially go on sale.

These tickets will be in very limited supply and will be available exclusively to those who have registered in advance. Sign up at ultrabrasil.com to avoid disappointment.

Having brought superstar acts including Above & Beyond, Carl Cox, DJ Snake, Hardwell, Martin Garrix, Nic Fanciulli and Tale of Us among many more to ULTRA Brasil first time around, 2017’s edition promises to be an even bigger spectacle with anticipation for the event set to be at an all time high.