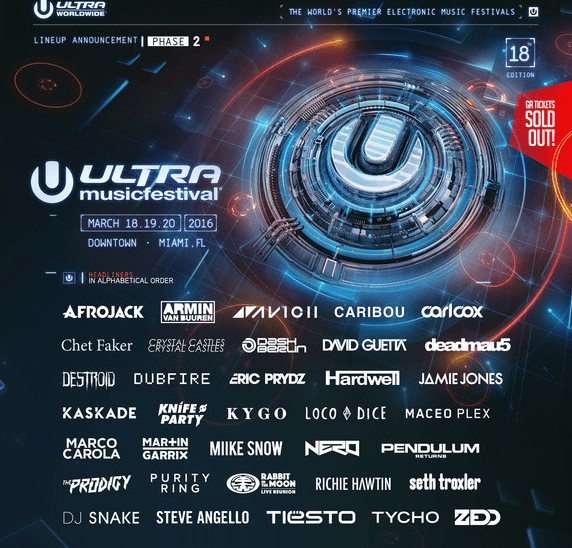 The official start to festival season, as marked annually by ULTRA MUSIC FESTIVAL, is just one month away! With GA tickets having SOLD OUT months in advance and with only a few VIP tickets remaining, the most successful independent electronic music festival brand in the world has released Phase Two of its Miami lineup.

Adding to one of the biggest Phase One announcements in the festival’s history are a host of additional headliners including (in alphabetical order) Crystal Castles, Dash Berlin, Deadmau5, Richie Hawtin and Steve Angello!

In a huge move from event organizers, and for the first time in the festival’s history (and ASOT’s history for that matter), both Deadmau5 and Eric Prydz will headline the ASOT Stage before the man himself, Armin Van Buuren, closes the gargantuan Megastructure on Sunday night.

Techno legend Richie Hawtin will be joining Carl Cox & Friends in The Megastructure on Saturday, while Dash Berlin and Steve Angello will be throwing it down on the Main Stage as only they know how. Last up from the Phase Two headliners, Crystal Castles will be returning to Ultra’s Live Stage armed with a load of brand new material, for what will no doubt be one of the highlights of the weekend.

In another Ultra first, Tiësto will play a one-off Sunset Slot at the Main Stage on Saturday, where the master-selector will no doubt bring his ever-expanding catalogue of music to the people.  Two very special labels will be taking over the UMF Radio stage across the weekend, with Hardwell’s Revealed Recordings hosting some of the most exciting up and coming artists in the house scene today on Friday for the very first time, before Skrillex’s OWSLA imprint returns on Saturday to provide Ultranauts with a face full of bass.

To complete the RESISTANCE stage (powered by the Arcadia Spider) the world’s number 1 club, Space Ibiza returns on Saturday to host some of the finest names on the house and techno circuit. Full details on running order for each day can be found on the official Phase Two poster here

For a full list of Phase Two acts, please see below.