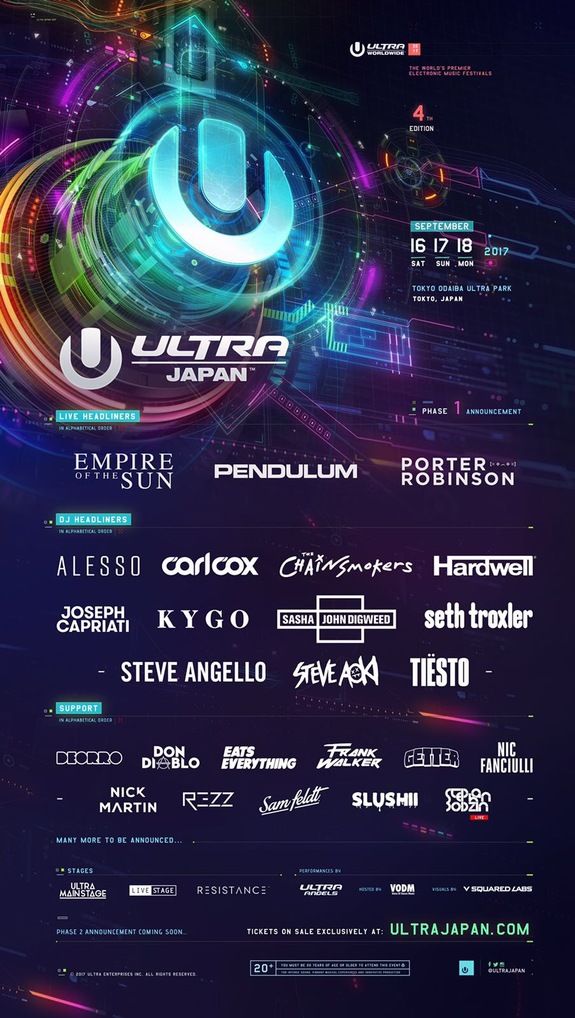 Following a SOLD OUT edition in 2016, ULTRA Japan is returning in 2017 bigger than ever before, as it reveals the incredible Phase One Lineup of artists set to perform at its upcoming fourth edition.

ULTRA Japan will also be adding a brand new stage in 2017, as it becomes the fourthULTRA Worldwide edition to host the esteemed LIVE Stage. Three of the most celebrated live acts in electronic history have been confirmed for Phase One: Empire of the Sun, Pendulum and Porter Robinson.

Having announced an Ibiza residency recently, RESISTANCE will also see a major upgrade in Tokyo this year, with Carl Cox, Joseph Capriati, Sasha & John Digweed and Seth Troxler set to headline one of ULTRA Worldwide’s most-loved concepts across the three days.

With over 120,000 people attending last year’s sold out edition, demand is expected to be at an all-time high for ULTRA Japan. Fans are advised to act fast in order to snap up tickets to one of the most in-demand events on the ULTRA Worldwide calendar. Tier 2 Advance Tickets are now on sale and available exclusively via ultrajapan.com.