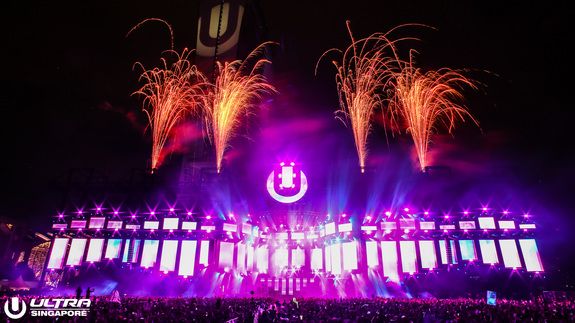 On the weekend of June 10 & 11 2017, ULTRA WORLDWIDE successfully produced two multi-day festivals in two different countries in Asia – South Korea and Singapore – for the first time in its illustrious history.

A first for any festival organization, this incredible achievement marks another slice of record-breaking history for the world’s largest independent, and most international, festival brand.

In one of the biggest weekends of electronic music the continent has ever witnessed, Ultra welcomed over 170,000 fans combined over two locations (120,000 in Korea and 50,000 in Singapore), in just two days.

ULTRA Korea, which returned to the capital city, Seoul, for its sixth annual edition, welcomed upwards of 120,000 fans to the immense Olympic Stadium, cementing its position as the largest two-day electronic music festival in Asia. Over 80 world-class acts came together across the Main Stage, Live Stage and RESISTANCE Stage – the latter of which made its highly anticipated, much lauded debut in South Korea this past weekend.

Meanwhile, some 3000 miles away, following its elevation to full festival status in 2016, ULTRA Singaporereturned to its home at Bayfront Avenue to deliver another groundbreaking programme of DJs and Live acts. Also showcasing the holy triumvirate of Main, Live and RESISTANCE stages, and with upgraded production across all, this was ULTRA’s most successful outing in Singapore to date.

For those unable to experience ULTRA Singapore in person, ULTRA Live’s internationally celebrated livestream, presented by UMF TV (produced by NOMOBO) was on hand with all the action, attracting over 320,000 viewers across the weekend.

With ULTRA’s first 2017 tour of Asia now complete, all eyes are now on the second leg, taking place this September. With an incredible SEVEN events taking place over the course of just ten days, including the debut of Ultra China – a multi-day festival in Shanghai – and Road To ULTRA India in New Delhi, be prepared for even more record-breaking and history-making from the world’s most successful festival brand.

For the full calendar of remaining Ultra events in Asia this year, see below. For all Ultra Worldwide dates, head to umfworldwide.com

Over the past nineteen years, thousands of the world’s most iconic DJs, producers and live acts have mesmerized audiences with awe-inspiring sets at ULTRA festivals in ARGENTINA, BALI, BRASIL, CHILE, CROATIA, IBIZA, JAPAN, KOREA, SINGAPORE, SOUTH AFRICA and of course MIAMI, as well as ROAD TO ULTRA® events in BOLIVIA, CHILE, COLOMBIA, HONG KONG, JAPAN, KOREA, MACAU, PARAGUAY, PERU, THE PHILIPPINES, PUERTO RICO, SINGAPORE, TAIWAN, THAILAND and the USA. Each new global edition has been founded on the same successful recipe that has been perfected over nineteen years in Miami, combining the most diverse electronic talent with the most technologically advanced, large-scale festival productions in the world.

The ULTRA brands have pioneered the live stream experience with ‘ULTRA LIVE’ (with over 650 million live stream and recorded set views from Ultra Music Festival Miami since 2013) and the audio broadcasting platform ‘UMF RADIO’ (syndicated to FM Radio in over 62 countries and reaching more than 22 million listeners weekly). Also UMF FILMS’ collaboration with FINAL KID has seen some of the most visually breathtaking festival aftermovies in the music space, including a feature-length documentary exploring the explosion of dance music, entitled CAN U FEEL IT™, which was premiered on the red carpet at the Klipsch Amphitheater in Miami in 2012 and was exhibited in over 500 theaters across the Unites States.

2016 and 2017 have seen the ULTRA and ULTRA WORLDWIDE™ brands continue to push the boundaries even further, bringing an unparalleled combination of cutting edge productions and the world’s best electronic acts back to previous strongholds and new frontiers across the globe. With the SOLD-OUT edition of ULTRA Brasil®, ULTRA Singapore™ having become a full scale two-day festival, RESISTANCE’s debut standalone South America Tour, and the debut of ROAD TO ULTRA®’s Hong Kong, 2016 was the brand’s most successful year to date.  A RESISTANCE summer residency at Privilege Ibiza is confirmed for 2017, while ULTRA China will debut in Shanghai on September 9-10, 2017. Also in 2017, two ROAD TO ULTRA® events will take place in New Delhi and India. ULTRA® have revealed further expansion into Australia for 2018. The ULTRA brand will be present in at least TWENTY-THREE COUNTRIES across SIX CONTINENTS worldwide by the end of 2018.