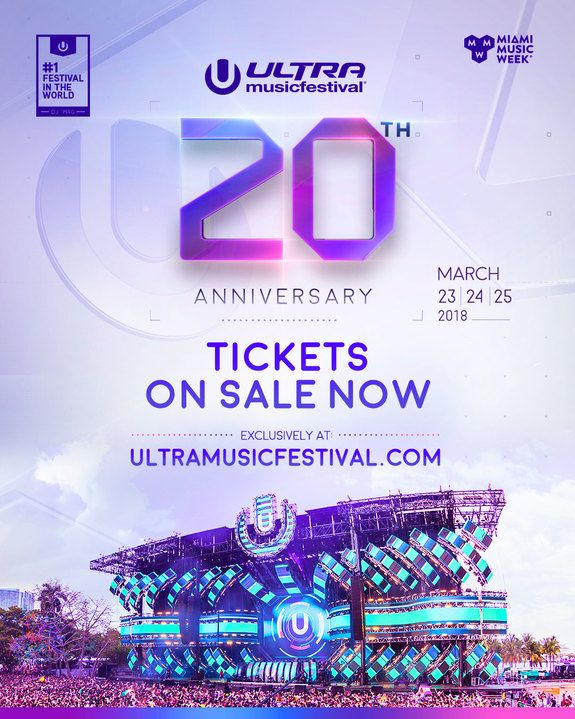 The preliminary round of tickets for Ultra Music Festival’s 20th anniversary in March 2018 are now on sale.

Available exclusively to those who registered in advance at ultramusicfestival.com, Tier 1 and Tier 2 tickets can be purchased for $299.95 and $329.95 respectively. Tier 3 tickets, priced at $349.95 will be available to all.

For the second year running, Ultra Music Festival has been voted the 'World's No.1 Festival' by DJ Mag voters. The world's most successful independent festival brand recently announced its expansion into China, India, and Australia, as well as a residency in Ibiza for its burgeoning RESISTANCE brand.

After another stunning sold out Miami edition, all eyes are now on next year's monumental 20th anniversary. As one of the longest running and most well documented music festivals of its generation, the 2018 edition will not be one to miss.

Ultra Music Festival 2017 was the most successful edition to date, uniting over 165,000 fans over three days in the heart of Downtown Miami. Featuring surprise performances from the likes of Future, Louis Tomlinson, Kygo, Nicole Moudaber & many more, music fans were treated to the very best the electronic community has to offer. To celebrate year nineteen of the world-renowned festival, Charly Friedrichs AKA Final Kid has created 'ULTRA MIAMI MEMORIES 2017' viewable in 4K exclusively on UMFTV.

Soundtracked by Paris and Simo’s ‘Keep Me Close’, the short film was shot entirely on RED Digital Cameras for the first time by Friedrichs and his Final Kid team. The result is nothing short of spectacular, with the three-minute cinematic journey giving viewers the chance to witness both the city of Miami and Ultra Music Festival in all of its beauty.

For further details and ticket information, head to www.ultramusicfestival.com.