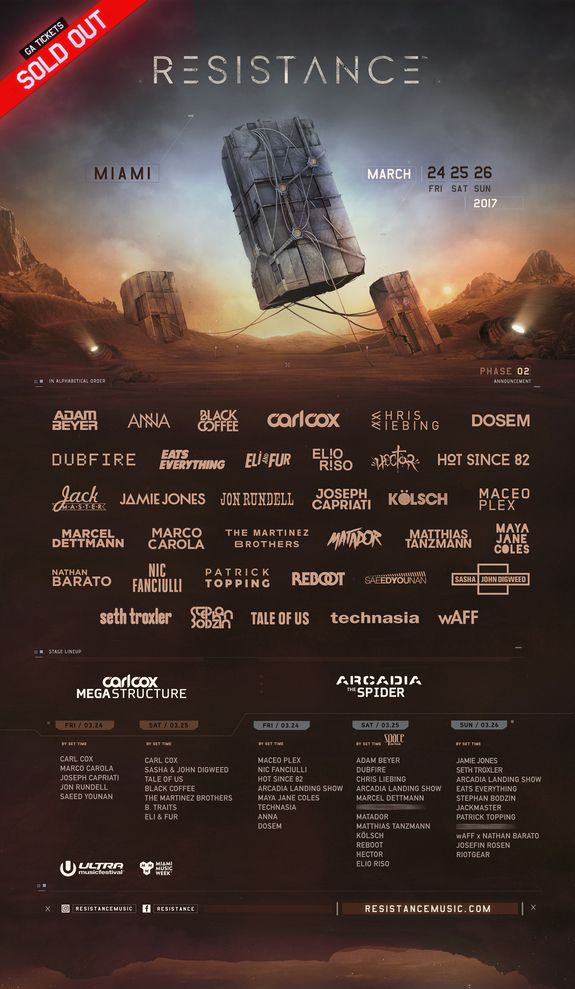 Marking the official start of festival season, the Miami event has once again pulled out all the stops with its Phase Two reveal, as it adds over 40 performers to a lineup already brimming with top tier talent.

Joining those announced during Phase One will be headliners (in alphabetical order) Adam Beyer, Chase & Status, Cypress Hill, Galantis, KSHMR, Rabbit in the Moon, Seth Troxler, Zedd and ZHU. Beyer himself is set to headline RESISTANCE powered by Arcadia Spectacular’s vaunted SPIDER stage, while Galantis and Zedd will each take up their customary spots on Ultra’s Main Stage. The other headliners announced in Phase Two, including KSHMR who has been booked for a very rare live performance, will each take their turn to perform on Ultra’s prized LIVE stage, which takes over the legendary Amphitheatre inside Bayfront Park.

The RESISTANCE lineup is officially complete with the likes of Jackmaster, Marcel Dettman, Maya Jane Coles, Patrick Topping and Stephan Bodzin among those who will join Beyer on the Arcadia Spider across the weekend. Last but certainly not least, the legendary brand that is Space Ibiza will bring their new Space on Tour concept direct to Miami, as they take over the SPIDER on Saturday March 25.

In addition, three very special labels will be taking over the ‘UMF Radio Stage’, including Diplo’s ‘Mad Decent’ and Afrojack’s ‘Jacked’ imprints hosting proceedings across two of the days for the first time. Skrillex’s ‘OWSLA’ collective will return for the second consecutive year to guarantee a true, bass-filled weekend at one of Ultra’s best hidden secrets.

For a full list of Phase Two acts, please see below.

The internationally renowned festival, which has taken place every March since its inception, celebrated its eighteenth anniversary on March 18-20, 2016 by bringing over 165,000 music enthusiasts to the sold out waterfront event in the heart of the City of Miami. Ultra Music Festival®, recently voted the world’s #1 Festival by DJ Mag, returns to Bayfront Park for its nineteenth annual edition on March 24-26, 2017.

Over the past eighteen years, thousands of the world’s most iconic DJs, producers and live acts have mesmerized audiences with awe-inspiring sets at ULTRA festivals in ARGENTINA, BALI, BRASIL, CHILE, CROATIA, IBIZA, JAPAN, KOREA, SOUTH AFRICA and of course MIAMI, as well as ROAD TO ULTRA® events in BOLIVIA, CHILE, COLOMBIA, JAPAN, KOREA, MACAU, PARAGUAY, PERU, THE PHILIPPINES, PUERTO RICO, SINGAPORE, TAIWAN, THAILAND and the USA. Each new global edition has been founded on the same successful recipe that has been perfected over eighteen years in Miami, combining the most diverse electronic talent with the most technologically advanced, large-scale festival productions in the world.

The ULTRA brands have pioneered the live stream experience with ‘ULTRA LIVE’ (bringing the festival online to over 20 million unique viewers globally) and the audio broadcasting platform ‘UMF RADIO’ (syndicated to FM Radio in over 62 countries and reaching more than 22 million listeners weekly). Also UMF FILMS’ collaboration with FINAL KID has seen some of the most visually breathtaking festival aftermovies in the music space, including a feature-length documentary exploring the explosion of dance music, entitled CAN U FEEL IT™, which was premiered on the red carpet at the Klipsch Amphitheater in Miami in 2012 and was exhibited in over 500 theaters across the Unites States.