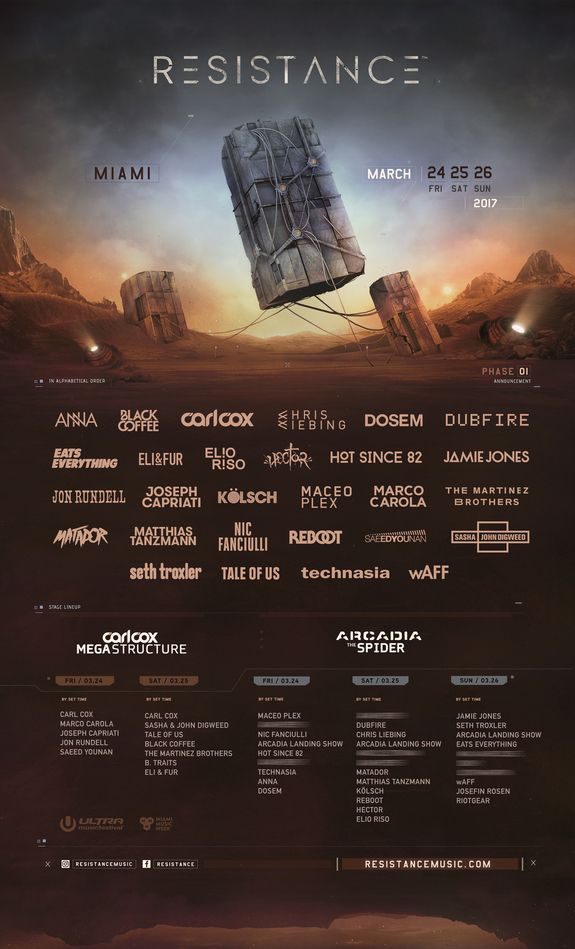 The 2017 edition of ULTRA MUSIC FESTIVAL will see its RESISTANCE concept dominate not one, but two huge stages at Bayfront Park as it grows into a festival within the festival. In addition to welcoming back Arcadia Spectacular’s imposing ‘Spider’ structure across all three days of the event, RESISTANCE will now team up with its recently announced global ambassador Carl Cox to take over the Megastructure on Friday, March 24 and Saturday, March 25. Following thirteen consecutive years of ‘Carl Cox & Friends’ inside the vaunted arena, the legend himself now introduces a brand new era as a driving force behind ULTRA’s burgeoning RESISTANCE concept.

Having unveiled a select few RESISTANCE performers in its Phase One lineup announcement on November 17 (including the U.S. return of Sasha & John Digweed together for the first time since 2010), the World’s Premier Electronic Music Festival now drops the names of thirty-one RESISTANCE acts set to descend upon Downtown Miami in just a few months time.

As mentioned previously, Carl Cox will helm RESISTANCE’s debut outing in the Megastructure across both Friday and Saturday, where he will be joined by (in alphabetical order) Black Coffee, Joseph Capriati, Marco Carola, The Martinez Brothers, Sasha & John Digweed and Tale of Us, among others. Support comes from B. Traits, Eli & Fur, Jon Rundell and Saeed Younan.

More RESISTANCE performers will be unveiled over the coming weeks.

Having touched down in ten countries (South Africa, USA, Croatia, Singapore, Indonesia, Japan, Brazil, Peru, Paraguay and Chile spanning five continents in 2016 alone, which included three standalone events in Paraguay (Asunción), Peru (Lima) and Chile (Santiago), RESISTANCE continues to grow from strength to strength. With huge plans in store for 2017, fans have only witnessed the tip of the iceberg.

RESISTANCE takes place at Ultra Music Festival during Miami Music Week, which is an 18+ event on March 24, 25 and 26, 2017. General Admission and VIP tickets are currently on sale at ultramusicfestival.com priced at $324.95 and $1,249.95 respectively. Early Bird and Payment Plan tickets have now sold out so act fast to avoid disappointment. For further details and ticket information, head to ultramusicfestival.com. For more information on all RESISTANCE events, visit resistancemusic.com.