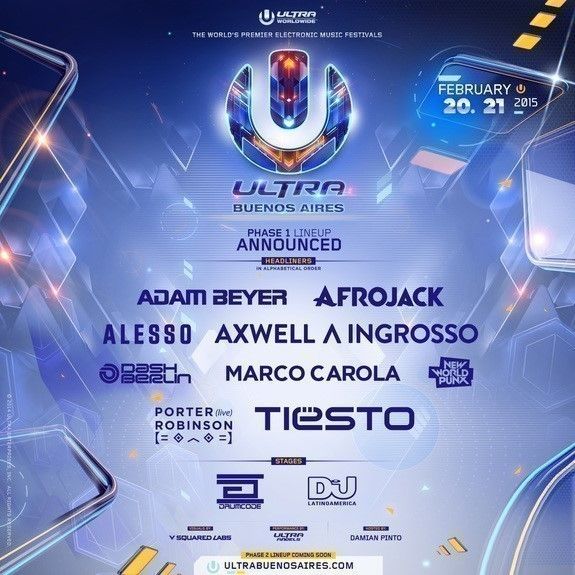 Following on from the success of 2014’s record-breaking edition, Ultra Buenos Aires returns for an even bigger and better 2015, as it announces a storming Phase One lineup.

Having built a reputation for producing some of the most eclectic lineups in the festival scene, Ultra Worldwide has once again pulled out all the stops with some of the most celebrated names in dance music set to play at the majestic Ciudad Del Rock in Buenos Aires.

Returning for the second time in as many years will be electronic music kingpin Tiësto, who is set to grace the Main Stage alongside fellow Dutch megastar, firm Ultra favorite Afrojack. There will also be a strong presence from Sweden, with both Alesso and the recently formed Axwell /\ Ingrosso outfit playing to the Ultra Buenos Aires crowd for the very first time. Legends Dash Berlin and New World Punx will bring some trance energy to proceedings and euphoric rhythms for the capital city.

At the deeper end of the spectrum, house and techno icons Adam Beyer and Marco Carola will be sure to bring a bit of Ibiza flavor over to Argentina. What’s more, Beyer himself will be bringing his Drumcode concept to Buenos Aires in the form of a hosted stage for all to enjoy, whilst DJ Mag Latin America too have been announced as another stage host.

The live music element that has become such a central tool to what Ultra Worldwide does with its lineups and will also be on full display in Argentina, as Porter Robinson prepares to bring his immersive WORLDS experience to an Ultra stage for the very first time.

Running across two consecutive days on Friday, February 20 and Saturday, February 21, 2015, Ultra Buenos Aires 2015 will be the fourth annual edition of what has now become a highlight in the South American electronic music calendar. In 2014 it became the most streamed festival in Argentina’s history with over 2 million viewers tuning in to watch the live stream of the event on Clarin.com. With a Phase Two announcement on the horizon to add to the already loaded lineup, the 2015 edition is undoubtedly set to surpass what has been achieved previously. Tickets are currently on sale exclusively through the official Ultra Buenos Aires website. For more information, visit www.ultrabuenosaires.com.

Phase One Headliners (in alphabetical order)

The Phase Two Lineup is coming soon.  Tickets are on sale now at ultrabuenosaires.com/tickets

Ultra Worldwide’s foray into the Far East has delivered one of their most loved annual editions in the form of Ultra Korea. Held at the Olympic Stadium Complex in Seoul over the last three years (August 2012, June 2013 and June 2014), it was in 2014 when the festival really put itself on the map, as the likes of Steve Angello, Empire of the Sun, M.I.A, Steve Aoki, Nervo, Sasha and many more played to over 100,000 revelers.

Now, the official aftermovie that captures all of the memories from that special weekend last June has finally arrived. Created by moviemaker Charly Friedrichs, alongside his award-winning Final Kid Team, and music by Dutch duo Vicetone with their latest hit ‘Tremble’, the aptly titled ‘Korean Tremble’ aftermovie brings the true Ultra Korea experience right to your door and provides fans with more than enough reason to start making plans to attend next year’s edition.

Set to run on Friday, June 12 and Saturday, June 13, 2015, and with DJ Mag #1 Hardwell and David Guetta already announced as headliners, tickets for the two-day extravaganza are bound to be in high demand, as over 100,000 fans will once again descend on the world famous Olympic Stadium Complex. For more information, head to ultrakorea.com