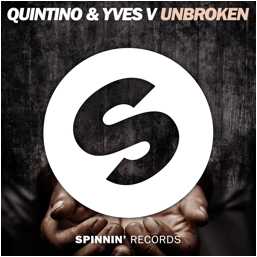 Things have been evolving impressively for young buck Quintino. After signing with Spinnin' Records and MusicAllStars management about a year ago, his successes quickly piled up. Releasing hit records like 'Escape (Into The Sunset)', 'Aftermath' (another 'epic collab' with Sandro Silva) and 'Devotion' (scoring major DJ support and over 2.8 million YouTube views) while performing bigger and bigger festival stages as 2015 progressed, he now closes the year with a much anticipated collab with legendary Belgian DJ/producer Yves V.

Without a doubt, DJ/producer Yves V is a name that rings a lot of bells with the global dance audience. He's been around for years already, making a name for himself with 2009 hit 'Insane Pressure', while last year saw his single 'Wait Till Tomorrow' turn into a massive festival hit. Currently # 34 on the DJ Top 100, his records are getting better with every release.

This is underlined with 'Unbroken', a track gaining more and more attention recently, enhanced by the support of DJs like Dimitri Vegas & Like Mike, Hardwell, Tiësto, David Guetta, W&W, R3hab and Bassjackers. It's a track all the mainstage characters seem to be into, making clear this Dutch-Belgian electro machine literally is 'unbroken'.

Combined with a wonderful video, recently shot in the streets of Hollywood, picturing Los Angeles 'police officers' handing out Christmas presents, this track seems to work wonders on multiple layers. In short, a collab between two great minds, leading to a track that will blast you out of 2015, and keep things moving till deep into the new year!