Manu Gonzalez - Underground Or Not EP 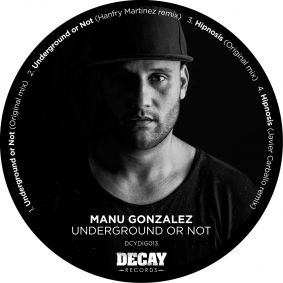 Manu Gonzalez - Underground Or Not EP

Ibiza Native producer Manu Gonzalez delivers two original productions on Decay Records this December with remixes from Overall Music founders Hanfry Martinez and Javier Carballo. Manu Gonzalez is one of the rare breed of home grown, super talented Ibiza DJs. Manu plays regularly at what most people consider to be the best clubs in the world; Ushuaia, HI? Ibiza or Pacha to name a few, as well as earning a year of international shows around the world, he’s also proving himself to be a talented producer with his tracks being picked up by labels like Moon Harbour , Knee Deep In Sound or Cr2. Manu Gonzalez continues to deliver dance floor focused house music with his next release on Decay Records.

Manu opens with ‘Underground or Not’ where clean breaks and a heavy-weight kick lay the foundations for smooth chords, mellow vocal samples and acidic transitions before Tenerife’s Hanfry Martinez’ remix adds crisp house percussion, glitching synthesiser melodies and spaced out pads to compliment the vocal cuts from the original.

Up next is ‘Hipnosis’ which offers echoing organic percussion and sharp cymbal work beneath a powerful bass riff, warped samples and enveloping pads whilst Canary Islands native Javier Carballo delivers hypnotic arpeggios, evolving atmospheres and shuffling rhythms which are underpinned by a rumbling low end in his take on ‘Hipnosis’.

Manu Gonzalez’ ‘Underground or Not EP’ drops on Decay Records on 22nd December 2017.