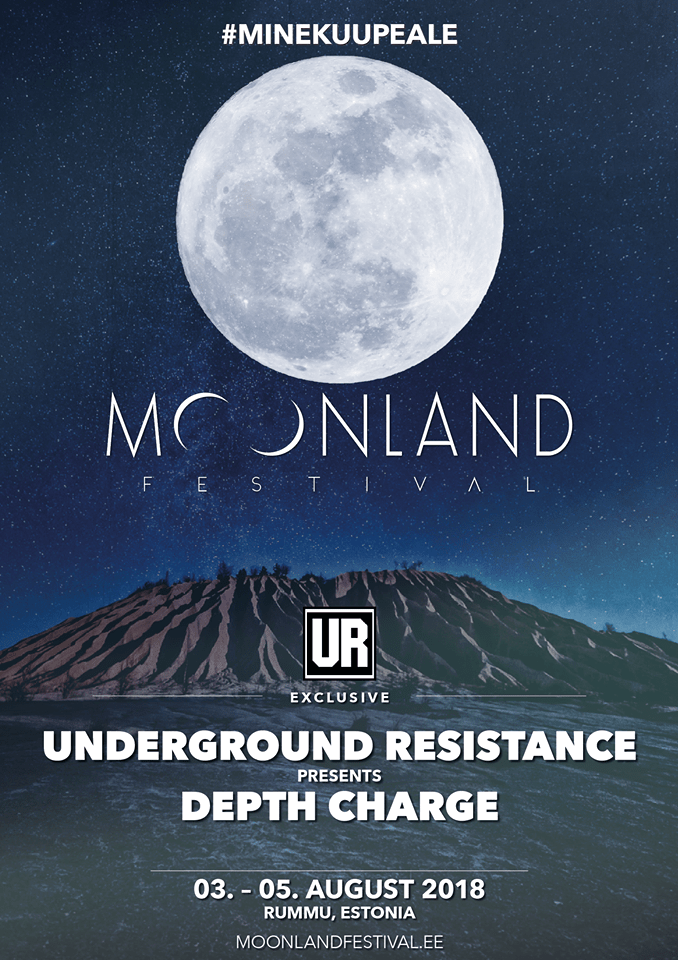 World famous DJs and musicians, light and laser installations, full-scale video-mapping, art objects and workshops in a unique location – this and much more welcomes the visitors of Moonland Festival, taking place between and outside the historical prison walls of Rummu, Estonia from the 3rd until the 5th of August.

Moonland is set to inaugurate it´s very first edition at the historical Rummu quarry and former prison, a Unesco World Heritage Site, not far from Estonia´s capital Tallinn – the best preserved medieval city in Europe and one of its hidden treasures according to the prestigious Lonely Planet guide. The site is surrounded by lush nature in the country that is considered to have the cleanest air in the European Union, add to that castles and ancient Teutonic monasteries and you get the picture of what a magnificent setting for a festival this is. Moonland as a concept speaks to us as a tribute to the arid landscape created by time and human strife. Conquered by the love of music and our fellow humankind.

And as a special treat, and for the first time in the Baltics, we are very glad to announce Underground Resistance presenting Depth Charge, with Techno Legends Mark Flash & Mike Banks closing the main stage on Saturday night at Moonland for a surprise long set. We are incredibly proud to have such legendary pioneers with us.

The second release of artists includes:

Also we are proud to announce the international team of organisers.

ARMA17 has cemented its reputation as one of Russia's finest promoters. Primarily catering to house and techno, the Moscow community takes its name from the industrial venue its founders originally threw parties in until it was closed in 2014. Having more than 10 years professional experience ARMA17 was responsible for Outline Festivals, big raves in former plants in Moscow, label nights in Berlin, Istanbul, Kiev, Vilnius, Ibiza, Vietnam.

SILA SVETA is an interactive media production studio, which has both Moscow and Los Angeles based teams of international specialists in the field of digitally immersive experiences. They have produced special shows for Samsung, Lamborghini, Panasonic USA, ASUS, Lexus, Met Gala, Signal and Day for Night Festivals and many other brands.

HALL is a Tallinn based platform offering a stage to electronic music and visual arts, with the aim of introducing Eastern European underdogs to the world. The club is the brainchild of Hugo Mesi and Elena Natale, who are behind Tallinn´s two successful techno events MÜRK and ISOLA. To make the team complete, a special duo were added to the team – movie director Rene Reinumägi and visual artist Karl-Erik Leik. Not so much later, the building was found. During the renovation many other lovers of the subculture wanted to get involved and so HALL became a community. So far, HALL has hosted renowned producers and DJs, such as I Hate Models, Dasha Rush, Regis, Samuel Kerridge, Mind Against and others.  Hall is a place where you can experience the ultimate freedom and be yourself… Welcoming all creatures of the night.

MÜRK is a techno music event, record label and community, currently based in Tallinn, Estonia. MÜRK has relentlessly contributed to expanding the local techno scene since its first parties in 2012 and throughout these years, Zadig, Henning Baer, Stanislav Tolkachev and many other artists from Estonia and abroad have shared their selections at the event.

The festival cares about the world we live in, and as Rummu stands today, it is a monument and witness to the many dissidents who paid a very high price for speaking truth to power. In this year of 2018, we believe Freedom of Speech is one of the most relevant topics of the day. Two-thirds of the world's internet users live under regimes of government censorship, and we are daily witnesses of the great lengths governments extend their power – increasingly in Western developed countries – to enforce censorship and restrain freedoms. Who has the right to decide what speech is allowed? Who watches those self-appointed watchmen? At Moonland we honor and respect everyone´s voice, regardless of race, gender, orientation, religion and yes, political leanings. Because we can never come together unless we make a true effort to understand the Other.

According to Elena Natale, one of the founders of HALL, Moonland Festival embodies a great opportunity to introduce the Estonian scene to the rest of the world. “As the festival also brings together a plethora of Eastern European artists, it might be the birth of a stronger cultural connection for the future,” Natale claims.