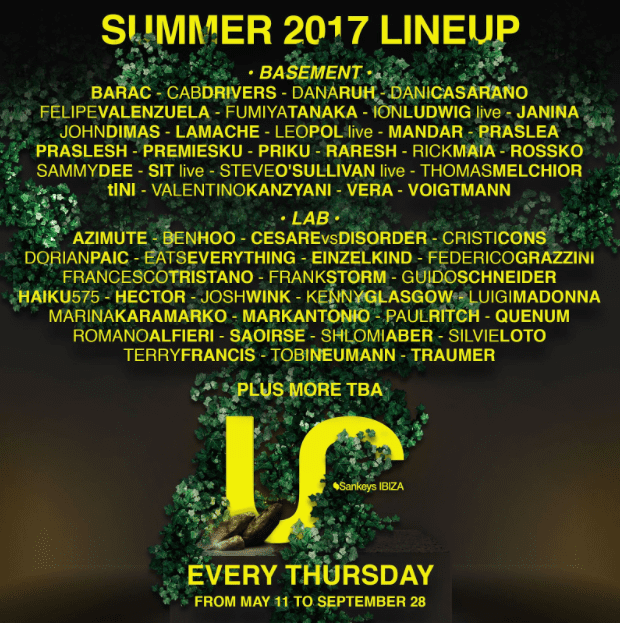 Unusual Suspects will return to Sankeys Ibiza once more in 2017, and once again the much loved night leads from the front with only the most tasteful, cutting edge and underground names.

The season will run from May 11th to September 28th, with weekly parties held every Thursday throughout summer. Both The Lab and The Basement will be open, meaning that bigger main room — as well as more intimate second room — experiences will be on offer. Sound-wise, there is nowhere better in Ibiza thanks to the club’s flagship Pioneer installation which offers booming lows and crisp highs all night long.

Holding down the fort each week throughout the season will be residents Federico Grazzini, Janina and Frank Storm, an Italian born DJ who has played all over the world, as well as releasing his cultured and stripped back sounds on top labels like Yuma, Sleep and Baile Muzik. May 12th will see Frank release on Get Physical, and May 17th he’ll release Serialism EP with remixes from Guido Schneider and Dana Ruh.

The big stars taking care of The Basement will be deep and heady acts like Dana Ruh, a live show from Ion Ludwig and long time underground favourites Cab Drivers. Add in the cult likes of the Mandar trio aka Lazare Hoche, S.A.M. and Malin Genie, plus Romanian stars Barac, Raresh, Praslea and Praslesh plus dub techno don Steve O’Sullivan, key London tastemaker and Toi Toi man Voigtmann as well as Ibiza regular tINI and the on point Vera and you have a peerless selection of artists who are right at the cutting edge.

The Unusual Suspects 2017 opening party takes place May 11th with tINI, Janina, Eats Everything and more.