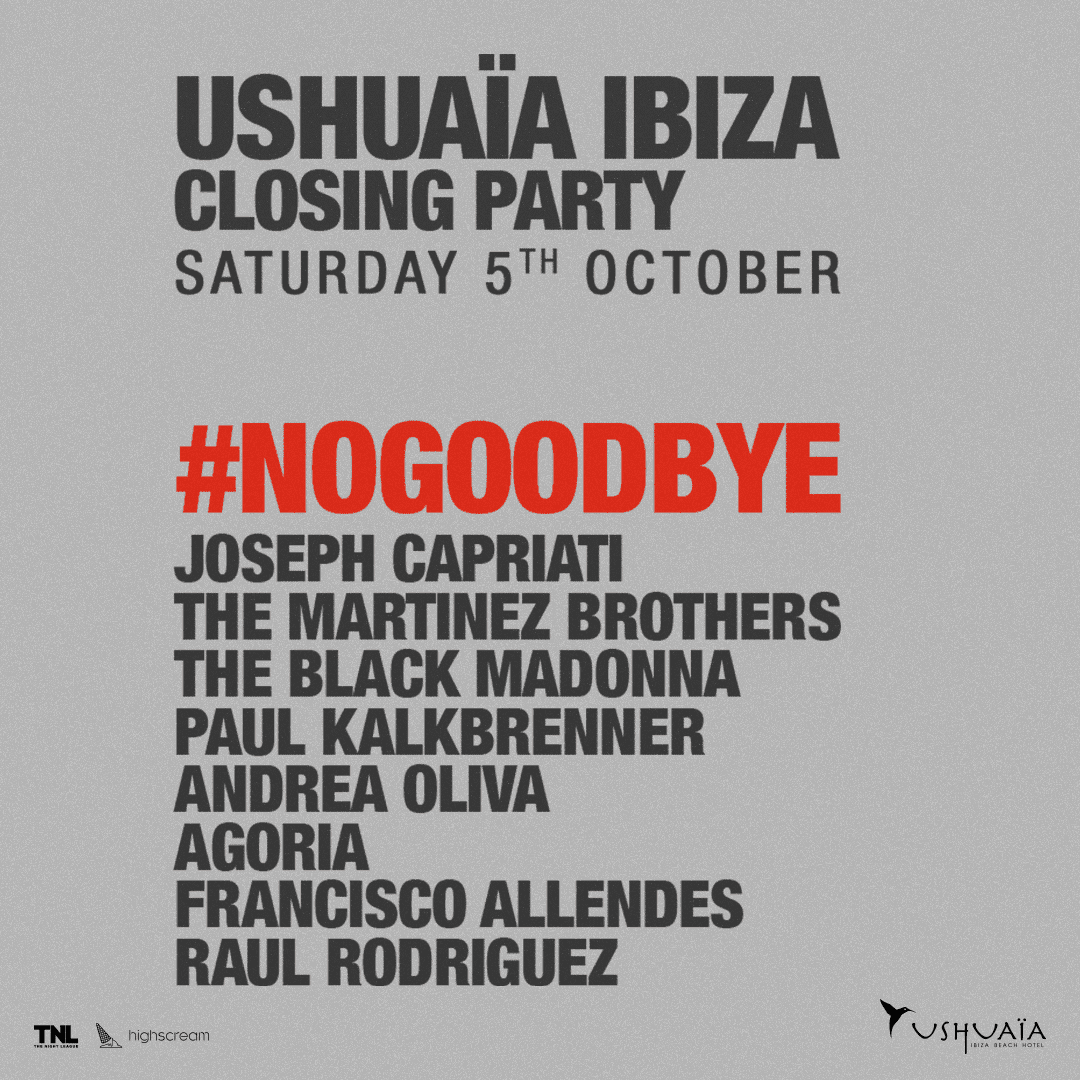 Mid-way through another phenomenal season, Ushuaïa Ibiza now reveals its unmissable closing party on Saturday 5 October. Pulling out all the stops with a truly massive house and techno line-up, they’ll be bringing the summer to a close with a resounding ‘bang’.

Italian techno stallion Joseph Capriati brings his muscular grooves to the closing party, showing when he has previously been voted in Resident Advisor readers’ Top 50 DJs in the world and teasing exclusives from his acclaimed Redimension label. The mightyMartinez Brothers’ percussive sounds and rolling grooves have been a mainstay on Ibiza in recent years, and with their Cuttin’ Headz events drawing ever-bigger crowds they make for a huge draw.

The Black Madonna’s eclectic house and disco anthems have helped to become one of the world’s biggest DJs in the last few years, and from the biggest festivals to intimate clubs, she can always be counted on for a mesmerising, feel-good set. As one of Berlin’s most popular artists, Paul Kalkbrenner’s stadium-sized techno epics are well documented, with his live shows always packing in the crowds at massive venues across the world, and his triumphant sounds make for a great addition to the party.

Completing the lineup ANTS headliner Andrea Oliva, fresh from featuring on BBC Radio 1’s legendary Essential Mix show. French techno legend Agoria’s intricate melodies have always made him one of the most interesting artists in the game, and in recent years his reputation has once again deservedly surged, Chilean DJ Francisco Allendes, and Spanish regular Raúl Rodríguez completes the spectacular lineup. Expect the world-class production to be particularly off-the-hook to compliment this formidable line-up.

It’s been an incredible season so far at the world’s foremost open-air club, with each residency pulling huge numbers every day. David Guetta’s long-running fixture on the island continues with BIG on Monday nights, with Tomorrowland presenting the show-stopping sounds of Dimitri Vegas & Like Mike on Tuesdays. Ushuaïa launched the new DANCE OR DIE by Nic Fanciulli concept with a sensational opening performance by Carl Cox. Sharing Wednesday nights was Barcelona’s madcap elrow, bringing four unique themes for each event. Martin Garrix’s world domination continued with his Thursday night residency, followed by the hitmaker himself, Calvin Harris, on Fridays. In-house creation ANTS once again rocked Saturday nights in style with the likes of Andrea Oliva, Joris Voorn, Davide Squillace, Matthias Tanzmann. The launch of Latin music nightMUCHO IBIZA every Sunday has proved to be a huge success, showcasing international superstars including Daddy Yankee, Becky G, Bad Bunny, Nicky Jam, and OZUNA, to name a few.

Other highlights have included the headline-grabbing and sold-out return of Swedish House Mafia to Ushuaïa on Friday 26 July, and  Kraftwerk’s highly anticipated 3D show for COCOON on Friday 13 September, which followed on from the first edition with Underworld and Sven Väth. After the incredible show with Armin van Buuren and Above & Beyond, Armin van Buuren will return for a solo show on Friday 20 September. Many more special memories and highlights are yet to be created over the next few weeks, culminating in this gargantuan send-off.

As a 360 music and entertainment company, The Night League, the team behind Ushuaïa Ibiza, brings the most sought-after names to Ushuaïa Ibiza’s world-famous stage and ensures they remain one step ahead of the game every time.

Based on the experiences gathered over the years Ushuaïa Ibiza’s legendary poolside parties have been drawing in the crowds ever since the very beginning. The #1 open-air club raises the bar ever higher, with an impeccable lineup of superstar residents from across the electronic music spectrum playing from daytime to midnight. Not just content with packing their nights full of world-class artists, Ushuaïa Ibiza constantly outdoes itself when it comes to phenomenal productions, with a different theme each night of the week. With incredible pyrotechnics, mind-blowing lighting, visuals and a state of the art sound system, not to mention the beautifully designed gogo costumes, as well as an abundance of confetti, streamers and CO2, it’s no surprise people flock from around the world for the inimitable Ushuaïa experience.