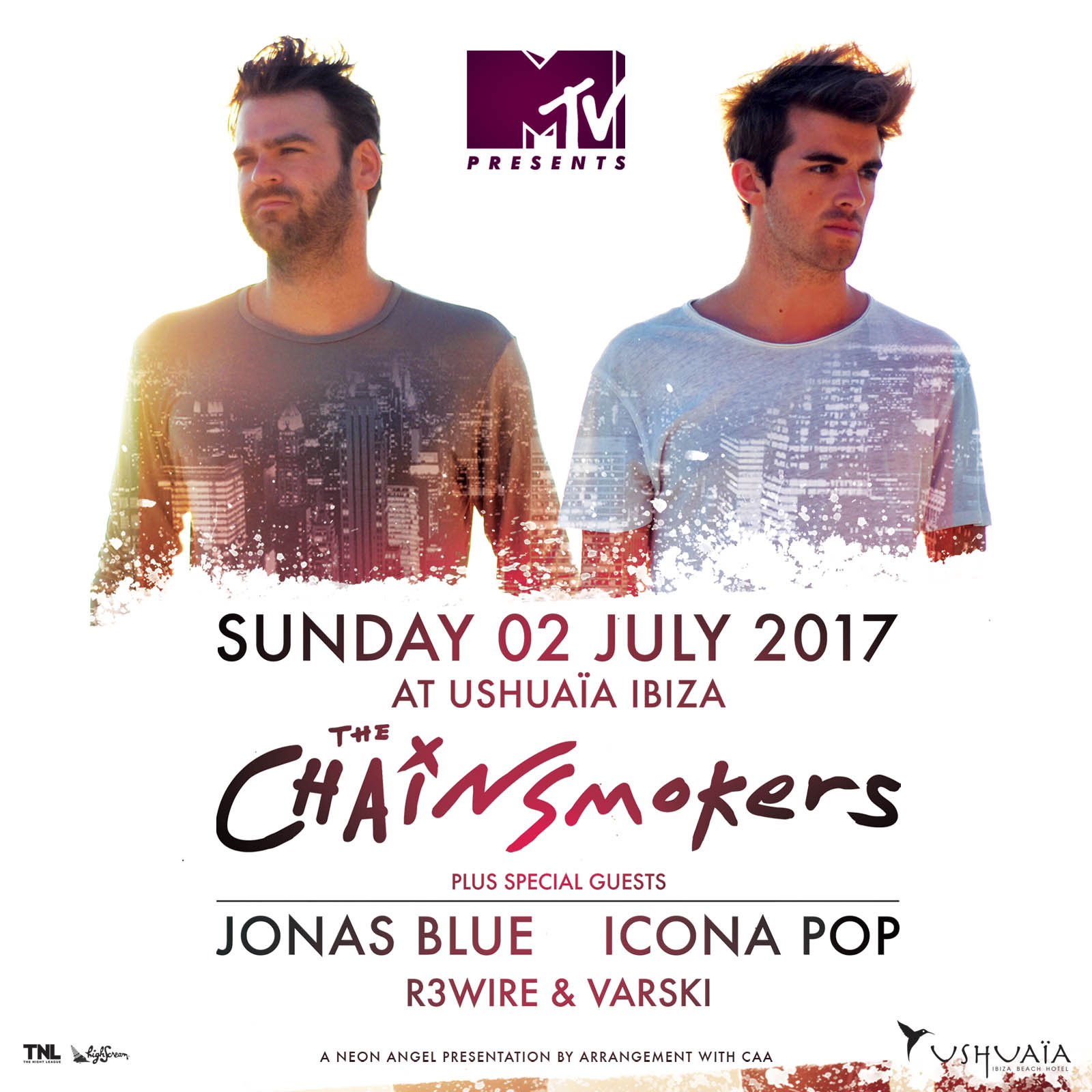 Ushuaïa Ibiza Beach Hotel have joined forces with MTV to host a one off performance from global chart-sensations The Chainsmokers. A Neon Angel Presentation by arrangement with CAA, the special event will take place on Sunday 2nd July.

One of the biggest forces in dance music today, The Chainsmokers have teamed up with the no 1 open air club for their only Spanish show of 2017 for what promises to be a show of epic proportions. Joining them will be very special guests MTV EMA and Brit Award nominee Jonas Blue, Swedish superduo Icona Pop as well as Club MTV ambassadors R3wire & Varski. Taking to Ushuaïa’s revered stage for just one night this summer, tickets are guaranteed to fly out.

The breakout story of 2016, The Chainsmokers have dominated charts around the world with their signature fusion of electronic, pop, indie and progressive, racking up an unbelievable 5 billion global streams and three multi-platinum singles. Aside from playing every major festival on the planet – from Ultra Music Festival to Coachella – the trailblazing twosome have since amassed a host of awards including a staggering 22 nominations at this year’s Billboard Music Awards, which will see them vying with the likes of Drake and Rihanna for Top Artist and Top 100 Artist – to name just a few of the awards they are up for. The release of their inaugural album ‘Memories…Do Not Open’ last month, saw them debut at #1 in the Billboard 200 Chart and Top Dance/Electronic Album charts, making them the first artists to have an album simultaneously lead both charts since Lady Gaga nearly three and a half years ago.

The man behind certified global smah ‘Fast Car’ and ensuing global hits ‘Perfect Strangers’ and ‘By Your Side’, there’s no denying Jonas Blue is one of the hottest producers around today. 2016 saw him sell more singles globally than any other debut British artist and his productions have been streamed over a billion times. Landing a coveted residency opening for David Guetta at Ushuaïa last year, Jonas will return to the poolside stage once again for another mind-blowing performance.

Icona Pop first dominated the airwaves around the world with their first triple-platinum hit single ‘I Love It’ ft. Charli XCX and have never looked back since. The iconic duo have since gone on to feature in HBO series Girls, performed live on NBC’s Late Night with Jimmy Fallon and The Today Show, ABC’s Good Morning America and CBS’s Late Show with David Letterman, America’s Got Talent and even performed at the Nobel Peace Prize Concert in December last year.  Famed for these incredible live performances, fans will be pleased to hear they will be doing a live vocals show at Ushuaïa in July.

Snapped up by MTV to become musical curators, hosts and ambassadors to MTV UK’s clubbing division ‘Club MTV’ back in 2013, R3wire & Varski have been taking the dance music world by storm ever since. With a host of international gigs under their belt, the dynamic duo have played everywhere from Europe to the Middle East and seen their productions become part of national TV campaigns for major brands such as Lucozade, Sky & McDonalds – proving their really is no end to this pair’s talents.

Proving their unwavering commitment to securing only the very best DJ talent, Ushuaïa Ibiza have outdone themselves once again with this latest booking. Renowned for their astounding productions, lighting and visuals set against a breath-taking backdrop of the Mediterranean, the iconic venue continually pulls out all the stops to ensure their poolside parties give fans an extraordinary experience they will never forget.