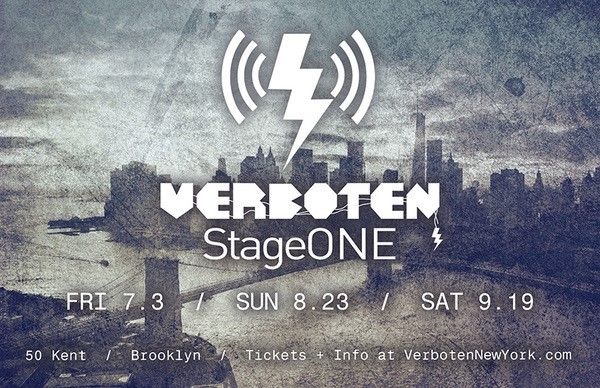 Verboten is excited to announce the full lineup for the return of the celebrated StageONE Festival at 50 Kent Avenue. Previously named “the party of the summer” by Mixmag, the expanded outdoor summer series features world-class talent, amazing sound and visual installation, delicious food vendors, games and much more taking place on the beautiful Williamsburg, Brooklyn waterfront.

StageONE kicks off with Sasha on July 3, teaming up with Verboten for a third year in a row to celebrate America’s birthday with his epic ‘Last Day on Earth’ marathon, featuring a top-notch lineup with techno heavyweight Scuba, and resident DJ and producer Guti playing live, joined by Verboten favorites Agoria, Kate Simko and Brad Miller, and global house and techno icon Joris Voorn as the special guest. Always championing forward-thinking house music, listen to Sasha’s newest track “Ether” here.

StageONE is a part of Brooklyn Live at The Inlet Presented by Century 21, a concert series at 50 Kent Avenue, featuring acts from indie rock, deep house and electronica, as well as hip-hop. The series is produced with the support of New York City Department of Parks & Recreation and Open Space Alliance for North Brooklyn (OSA). Proceeds from the concert series will be used to help maintain, activate, and further develop the Park.

Single day tickets and combo passes are on sale now at VerbotenNewYork.com while supplies last