Global sensation Aya Nakamura and US hip-hop extraordinaire Lil Pump have collaborated on new hit ‘Pookie’, out August 2nd via Warner Music. The language-traversing afropop single combines Nakamura’s scintillating French vocals with Lil Pump’s rhythmic flow. The original high-energy track, which featured on her double platinum-selling album Nakamura, has already amassed over 160 million streams since its release last autumn. Counting the likes of UK vocalist Sam Smith and grime icon Stormzy as fans, the latter recently enthused to BBC Radio 1 host Annie Mac: “She [Nakamura] is the top in France. She is so incredible. I don’t speak French, I don’t understand French… but it’s THAT good when I don’t understand what she says. The vibe, the melodies, it’s incredible feelings.”  Nakamura’s meteoric rise began with her earworm single ‘Djadja’. With over 655 millionstreams to date, the hit topped the charts across the whole of Europe, making the star the first French female artist to top the Dutch charts since Edith Piaf in 1961. Named by The New York Times as “One of the most important acts in Europe now, musically and socially”, the Mali-born, Paris-raised talent is now the most streamed French female artist worldwide. Having just crossed the 1 billion views mark on her YouTube channel, she was named among the Forbes ‘30 Under 30’ list earlier this year, and earned a BET Awards ‘Best International Act’nomination. Miami-born Lil Pump rose to popularity off the back of hit single ‘Gucci Gang’ from his critically-acclaimed self-titled debut album. The 4x-platinum track peaked at #3 on the US Billboard Hot 100, and he has since collaborated with hip-hop royalty Kanye West and Lil Wayne, while also releasing his second studio album Harverd Dropout earlier this year. Aya Nakamura has firmly established herself as a global superstar over the past twelve months. Collaborating with US hip-hop A-lister Lil Pump cements this status even further 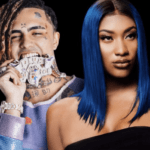