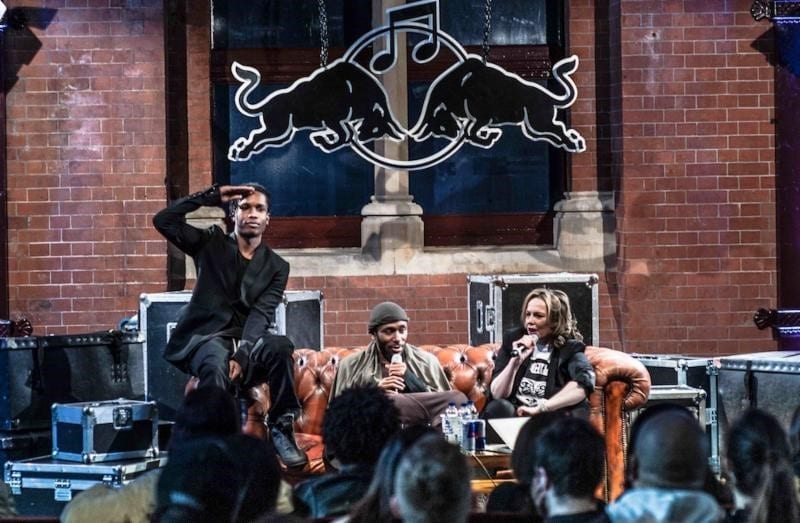 On April 8th, Harlem-bred MC A$AP Rocky held court at an intimate lecture session in central London’s St Pancras hotel, as part of the Red Bull Music Academy UK Tour. Perched atop the same sofa on which he crafted much of his latest album at Red Bull Studios London, A$AP Rocky lifted the veil on the forthcoming LP At.Long.Last.A$AP and his love for London, with a few surprises thrown in along the way. Streamed live for those not able to make it down on the day, the lecture is now available in full on the Red Bull Music Academy YouTube channel.

Hosted by i-D’s music editor Hattie Collins, the lecture offered a rare glimpse into the man behind the music, Rakim Mayers, whose stock started out somewhere between his two home neighbourhoods, Harlem and the Bronx. Inviting NYC rap legend Yasiin Bey (formerly known as Mos Def) up from his front row seat, the pair spoke of their mutual respect as Rocky credited the Brooklyn luminary with being one of the driving forces behind his initial recognition. The audience of fans, media and fellow artists were also treated to the premiere of M’$, the first track to drop from Rocky’s upcoming album.

Touching on his love of UK grime, London architecture, and respect for homegrown talent Skepta, Kano, Tempa T and King Krule, he also let slip that before his first trek across the pond, his visions of the UK were of roller-skate-clad policemen and pink crisps. Older and somewhat wiser, his impressions of the capital are now influenced by the historic architecture and rich musical history that forms the bedrock of the city.

A$AP Rocky will grace the lecture couch once again on May 7 as part of the Red Bull Music Academy Festival New York. The intimate discussion will take place on his home turf in Harlem, New York where he (and a few special guests) will speak candidly about the manifold influences in music and fashion, the breadth and depth of the A$AP Mob, and carrying the torch of NYC’s rapping tradition. Get full details at nyc.redbullmusicacademy.com