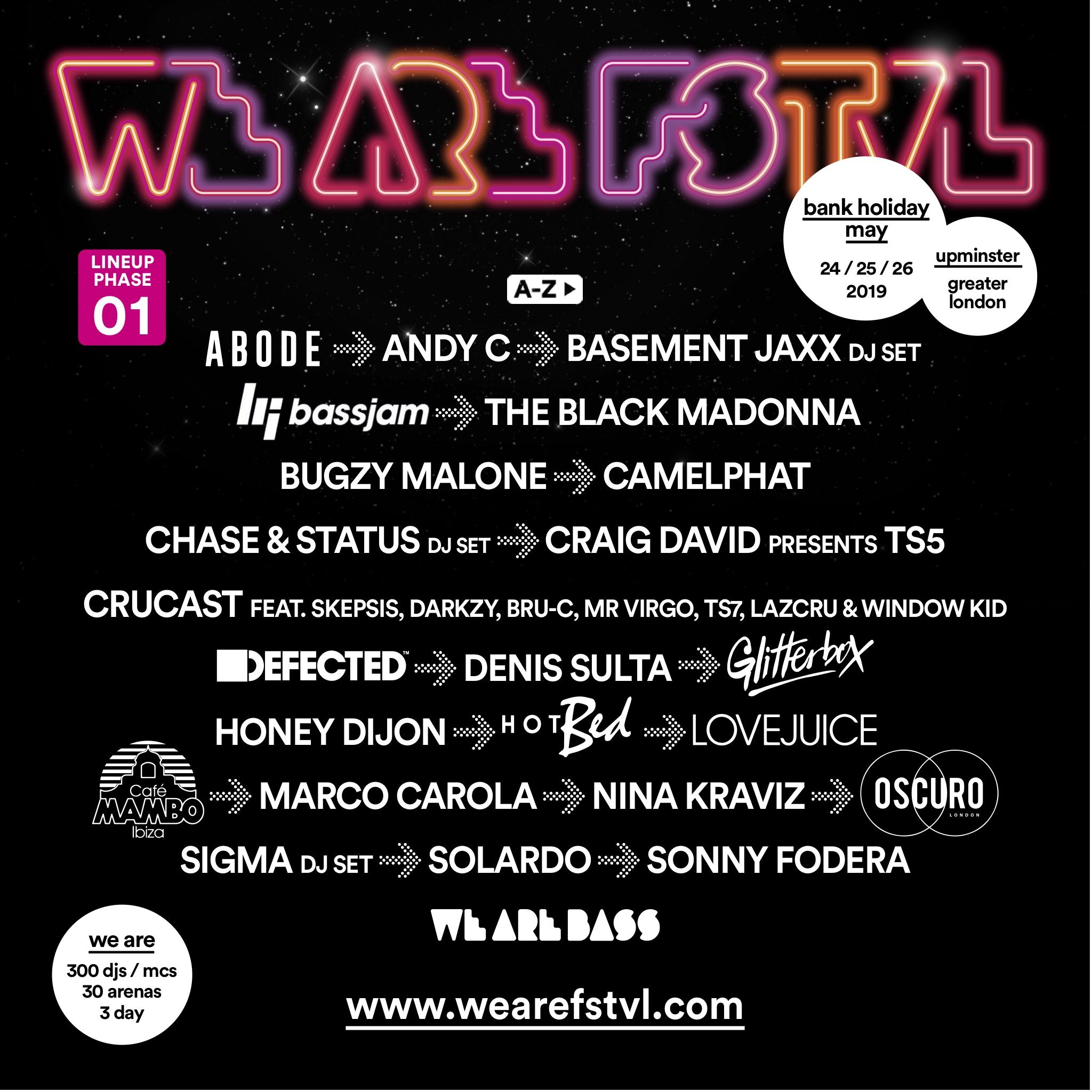 The ultimate highlight of the festival calendar for true ravers and returning for its hugely anticipated 7th edition, We Are FSTVL is heading back to Damyns Hall Aerodrome, Upminster from 24th – 26th May 2019, bringing together colossal names in House, Bass, Techno, UK Grime, and Drum & Bass. Announcing the first 20 acts in what is guaranteed to be the festival’s boldest line-up of 325 acts, headliners for 2019 include Basement Jaxx, Sigma, Solardo, Bugzy Malone, plus many more. Weekend and day tickets are available to pre-order here.

Drawing in a crowd of over 90,000 across the weekend, We Are FSTVL is the biggest dance festival in the capital. Now in its 7th year of supplying London with the world’s biggest acts, 2019 is gearing up to be its most explosive year to date. Spread out over 30 stages, 2019’s site is the largest footprint in the festival’s history, with two exclusive new bespoke stage structures taking residency onsite. Music lovers will also witness the worldwide exclusive debut of “The Maze,” the largest Truss supported stage ever used in the UK.

Transporting audiences back to the summer party vibes of Ibiza, Defected and Glitterbox will be returning to We Are FSTVL for 2019. This year will also see Café Mambo and HotBed host the official VIP area, the perfect celeb spotting hangout.

Director of We Are FSTVL, Reece Miller, said: “Following a record breaking 2018, the British Festival Industry witnessed one of the greatest summer’s in its history. We Are FSTVL was fortunate enough to be one of those that had a great event with our largest ever attendance to date. We look forward to We Are FSTVL 2019 for our 7th edition, lucky number 7, where we’ve taken our time to construct our greatest, latest, biggest & best line-up of all time. The team at We Are HQ have 2 unbelievable new world exclusive stage arena concepts that will be showcased for the 1st time ever on our beloved Airfield of Dreams. We can’t wait to get cracking, Your Summer Starts Right Here!

2019 headliner and DJ extraordinaire, Andy C said: "Headlining We Are in 2018 was a huge highlight for me. It was like a homecoming and I can’t wait to do it all again in 2019!"

Regarded as one of the most pioneering British groups within the electronic genre, Basement Jaxx will be headlining this year’s We Are FSTVL. Having recently released their explosive new single, ‘Bingo Bango’ with Tom Staar and Kryder, the two piece from London have raked in over 15 million streams on their worldwide anthem, ‘Good Luck.’

Combining their unique take on electronica, drum & bass and house, Chase & Status have released four genre defying albums as well as collaborated with the world’s biggest acts including Rihanna, Cee Lo Green, Plan B and Tinie Tempah. Their August 2018 hit, ‘Retreat2018’ is both anthemic and intricate, the perfect soundtrack for the crowds at We Are FSTVL.

With a hugely anticipated upcoming performance at Wembley Arena on 17th November, Andy C sold out the world-renowned 12,500 capacity venue in just 72 hours. Regarded as one of the leading forces within the drum and bass genre, the British DJ is famed for his fast-paced mixing style and epically heavy basslines.

British icon Craig David needs little introduction. Having sound tracked the last twenty years with a catalogue of huge hits including “7 Days,” “Fill me In” and more recently “When The Bassline Drops” featuring Big Narstie, Craig David released his critically-acclaimed seventh studio album, “The Time Is Now,” in January 2018. The epic record charted in twelve countries across the world and saw huge collaborations with some of the hip-hop, grime and R&B industries biggest names; AJ Tracey, Kaytranada and Goldlink.

All artists announced so far: