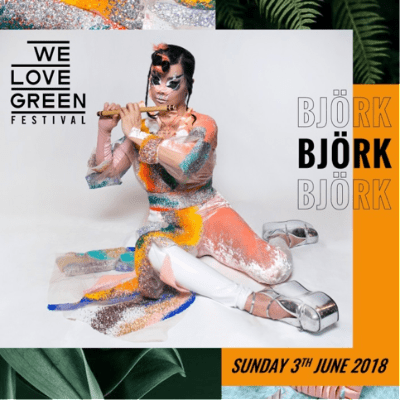 The ever-evolving pop icon and future-folk songstress has been surprising and captivating listeners throughout a career that has spanned more than a quarter of a century. Now the ground-breaking Icelandic artist will headline We Love Green on June 3rd for what’s set to be her only show in France during 2018. It’s a natural fit: Paris’ leading sustainable music and arts festival is to be headlined by an artist with a longstanding dedication to environmental issues.

This brand new show will see Björk performing within the festival’s glorious woodland surroundings. She has just returned with her eagerly-anticipated new album ‘Utopia’. Continuing her singular and unpredictable musical vision, ‘Utopia’ is a vibrant manifesto for a better world. The album was written, produced and recorded by Björk between Reykjavik and New York in close collaboration with Arca.

2018 will see We Love Green move to a new home within the Bois de Vincennes public park on the Eastern outskirts of Paris: the Plaine de la Belle Étoile. Next year’s edition looks set to be the best yet with several inventive additions to the event, including: new talent stages; hidden mini-dancefloors; art installations throughout the woodland paths which lead to the festival; new visual displays; and an optimised festival site which allows attendees to flow between stages at ease.

Every year, We Love Green curates a line-up of cutting edge artists at the forefront of the contemporary music scene. It spans hip-hop, indie, electro, pop and rock, and also showcases the current wave of French artists who possess world class talent.

Everything at We Love Green is planned with a key question in mind: “What resources do we have to hand, and what can we make with them?” The festival aims to raise public awareness of environmental issues and hopes to inspire people to be able to make small changes which will have a huge impact. Music can be a tool to express solidarity and to provoke social change.

Each part of We Love Green is planned in keeping which the festival’s commitment to green credentials – and it always welcomes new ways of working and evolving. We Love Green is just the start of the mission.

Tickets for We Love Green 2018 will go on sale from Wednesday November 29th. In the meantime, relive the highlights of We Love Green’s 2017 event with this short film. With exceptional live performances and DJ sets, inspiring speakers including two Nobel Prize winners, incredible weather and nearly 60,000 festival goers, it was an incredible weekend of celebration.