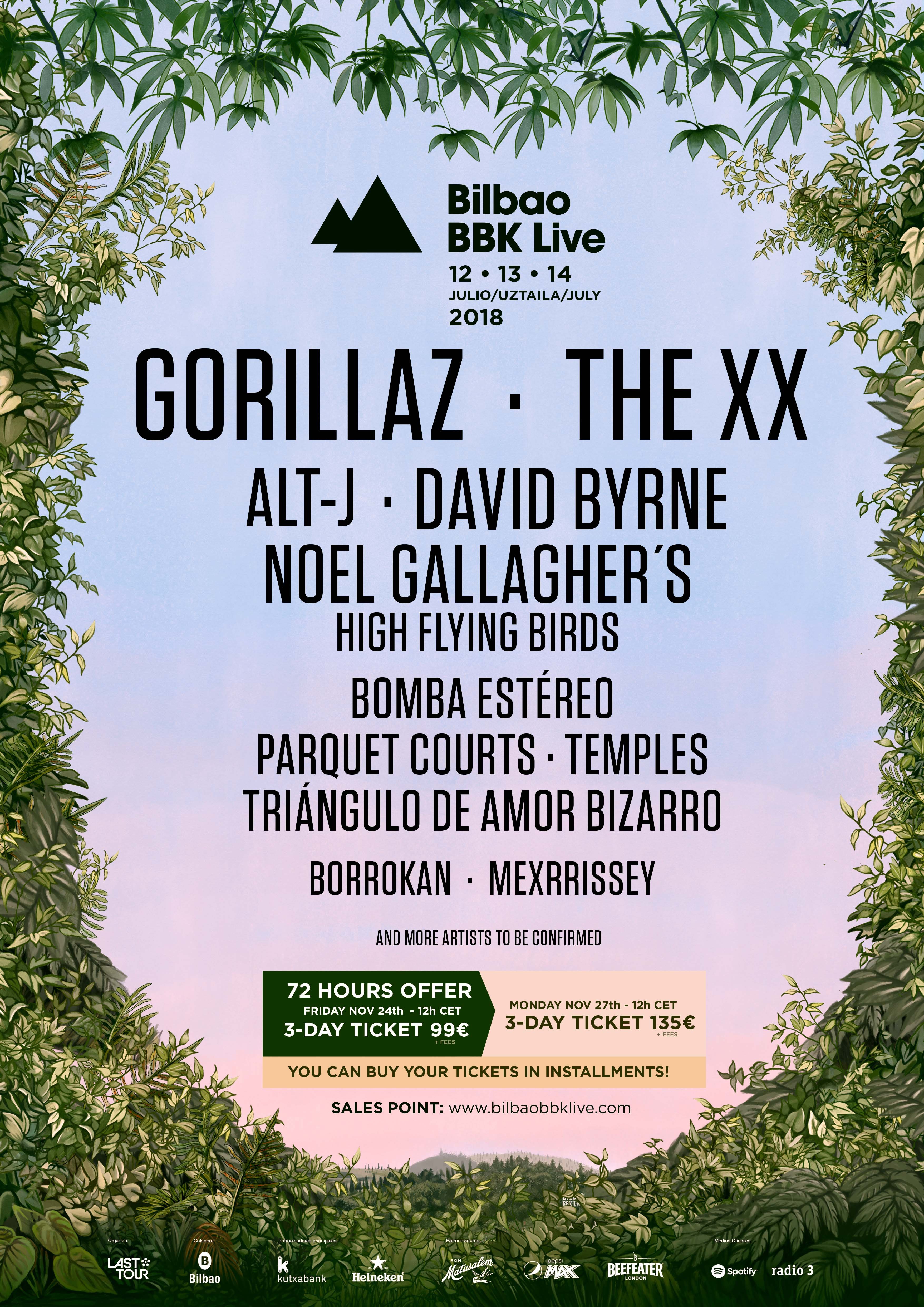 Bilbao BBK Live unveils the second wave of acts for 2018. Noel Gallagher, alt-J, David Byrne, Bomba Estereo, Temples and more are set to join previously announced acts The xx and Gorillaz, on Bilbao’s Kobetamendi Mountain in the heart of the Basque Country, from 12-14 July 2018.

With these new confirmations, the festival also announces a special 72 hour ticket offer, giving fans the chance to snap up a 3-day festival pass for just €99 + bf, before the price rises to €135 + bf at 1200CET on Monday 27th November.

Noel Gallagher is set to perform on an exclusive date in Spain at Bilbao BBK Live. Responsible for writing some of the most iconic hits of a generation, the former Oasis star continues his remarkable solo career today, with the release of highly anticipated new album with the High Flying Birds, Who Built The Moon', rated by Q magazine as his best work in the last decade.

Mercury prize winners alt-J continue their unstoppable musical career. With a number 1 record in the UK, nominations for Brit and GRAMMY awards, and the quality of their live performances, the band has forged a solid reputation. Now returning with their third studio album 'Relaxer', described by critics as a new classic of our time, they are sure to be a festival highlight.

Bomba Estereo reinvented Latin musical culture and exported it to the whole world with electronics, rhythm, great songs and fantastic live shows. The Colombians, who have toured with Arcade Fire and been given props from Barack Obama no less, are guaranteed to put on a spectacular show on Kobetamendi.

Temples have enjoyed a meteoric rise since breaking onto the scene with their first demo on YouTube. Signed to Heavenly, the band’s second album, 'Volcano', published this year, has consolidated them as one of the most relevant Psychedelic rock groups of the moment, with supporters that include Noel Gallagher, Suede, Kasabian and The Vaccines.

Also joining the line-up are Brooklyn rock band Parquet Courts; Triángulo de Amor Bizarro, one of the biggest acts on the Spanish independent scene; Mexrrissey, famous for reinterpreting the songs of the former leader of The Smiths with a Mexican touch; and experimental Spanish band Borrokan.

With the festival taking place just moments from the city, there is plenty to explore before the music starts each day. Take a trip into culture-rich Bilbao to wander the winding streets of the old town, devour delicious pintxos, sample the famous michelin-starred Basque gastronomy scene, visit the impressive galleries and museums including the imposing Guggenheim, or soak up some sun on the beach. 3-Day Tickets start from just 99€. Book now at bilbaobbklive.com