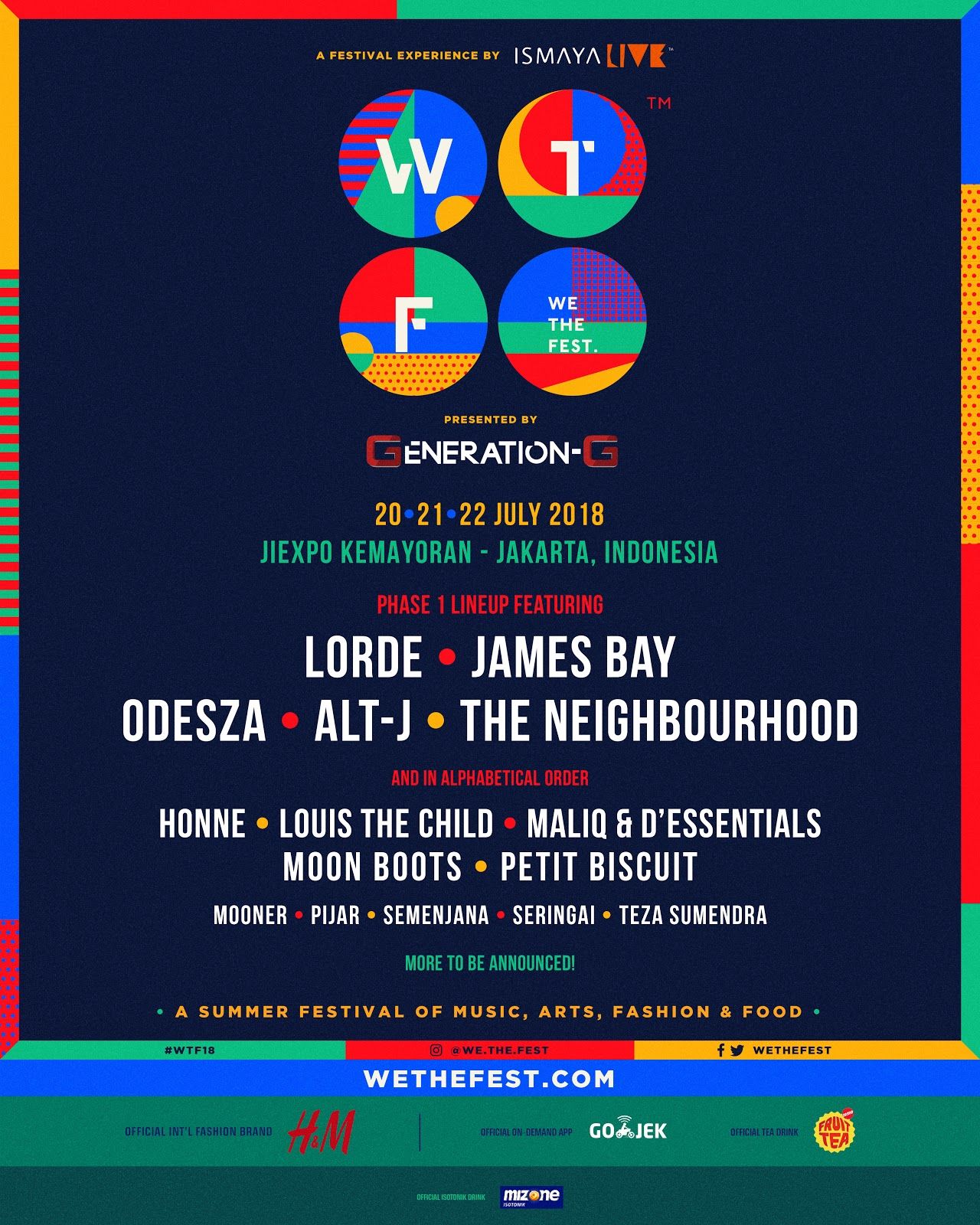 Returning to Indonesia’s colourful capital of Jakarta for its fifth annual edition on 20, 21, 22 July,  We The Fest (WTF) – the ultimate South East Asian festival – today announces its first phase of artists.

Having secured the likes of Big Sean, Phoenix, and The Kooks last year, as well as there being an impromptu visit from Indonesia's president himself, 2017 was always going to be a tough act to follow. However organisers Ismaya Live have once again pulled out all the stops, inviting the very best in pop, indie and electronica from around the globe to fill their first billing.

First up is multiple Grammy-award winning solo artist, Lorde. Known for her world-wide smash hit ‘Royals’, which hit the #1 spot in five countries and went platinum in six, her ethereal style and unparalleled stage presence will be lighting up the JIExpo Exhibition Center over the weekend. Currently on her Melodrama tour, of which her latest album was named, this will be Lorde’s debut performance in Indonesia. She joins British talent James Bay, who shot to success with his #1 and Grammy-nominated track ‘Hold Back The River’. Bay will be debuting a new look and “high energy” sound which promises to be a one-of-a-kind performance.

Another Indonesian first is the addition of Odesza, who have been turning heads since 2012 with their cinematic and unique productions. Incorporating dramatic live percussion, creative visuals, and sublime light sequences in their shows, they are certainly not ones to be missed.

Also gracing We The Fest in July will be alt-J and The Neighbourhood. Indie-rockers alt-J will be showcasing their Mercury prize-winning sound and latest album Relaxer, with The Neighbourhood providing variation with their distinct hip hop/rock crossover style.

Propping up these musical heavy-weights is an array of talent covering a broad spectrum of sounds. Flying the flag for future-bass is Louis The Child and french up-and-comer Petit Biscuit, while british duo Honne will be wowing WTF revellers with their alt-pop style. Returning to Indonesia is brooklyn-based selector and all round party-starter, Moon Boots. Utilising an extensive house and disco record collection, the veteran DJ will be keeping energy high until closing time. Homegrown talent is also represented with jazz legends Maliq & D’Essentials, rock supergroups Mooner and Seringai, indie-pop outfit Pijar, rising star Semenjana, and R&B favourite Teza Sumendra.

Coupled with this lineup announcement is the release of the 2017 aftermovie, where fans can now relive the three day extravaganza. Zipping between electrifying performances, the Art Village, Eats & Beats food stalls, the Games Zone, the H&M Fashion District, and the WTF Cinema Club, this movie gives a taste of the great things to come later this year.