We The Fest Phase 2 announced… 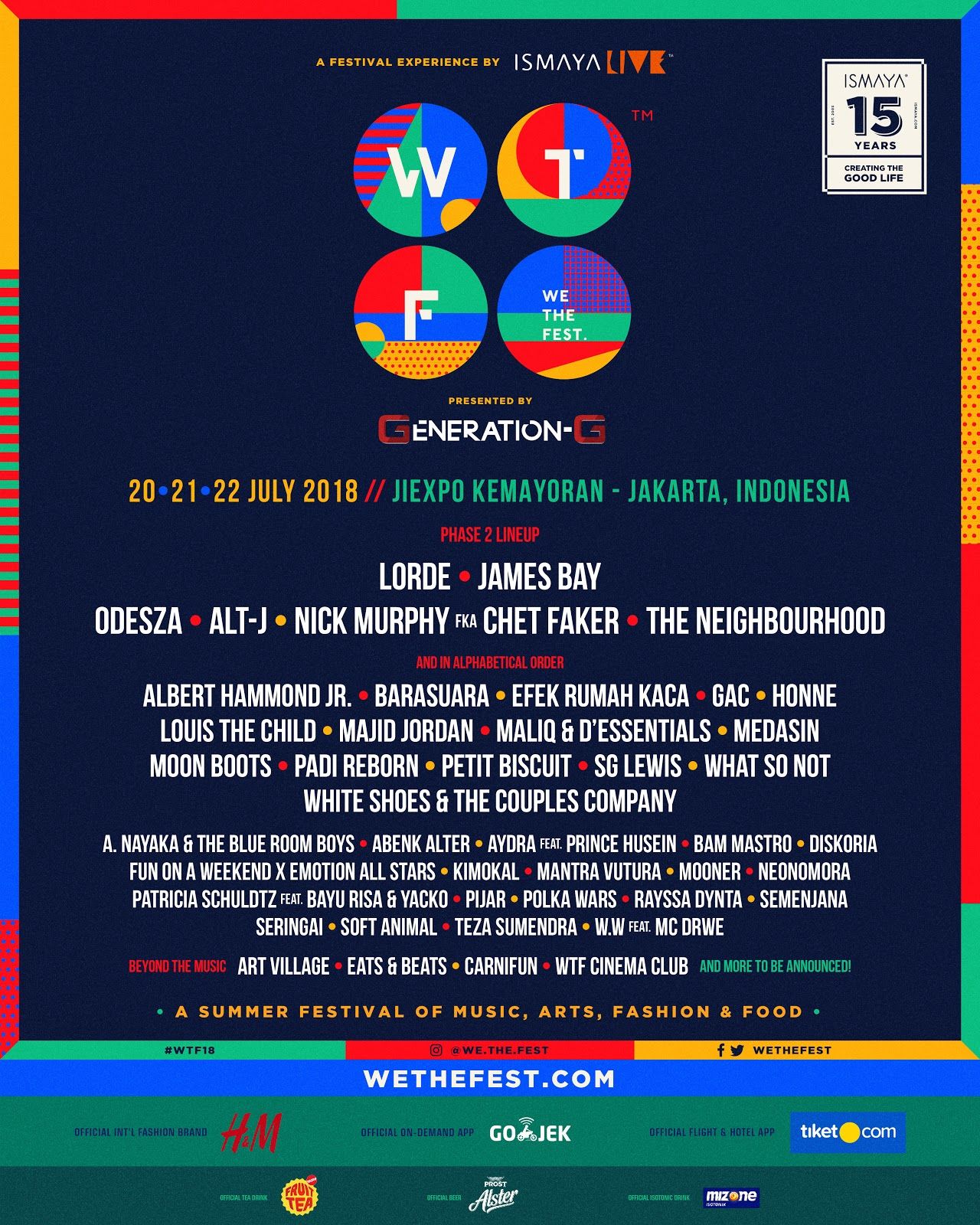 We The Fest Phase 2 announced…

We The Fest, South East Asia’s premier festival for all things music, arts, fashion and food, continue to exceed expectations with the announcement of its second phase of artists. Pulled from the very top of the R&B, indie, and dance spectrums, festival organisers Ismaya Live have once again reasserted We The Fest as the go-to-festival of choice in the region.

New to the billing is Australian indie-pop phenomenon Nick Murphy. Having killed off his pseudonym Chet Faker, for which he built a cult following with glitch-soul reimaginings of hits like Blackstreet’s ‘No Diggity’, Murphy is now building similar momentum with this new project. Fellow countryman and trap heavy-weight What So Not will also be joining proceedings at the JIExpo Exhibition Center, taking things up a gear with his supercharged set and showcasing his new album, Not All The Beautiful Things. Continuing on this theme is future bass aficionado Medasin who has acquired millions of plays for his inventive remixes of Post Malone, Joji and Portugal The Man.

R&B trailblazers and Drake protégés, Majid Jordan, are also announced today. Having turned heads with their smooth and sensual style, and with artists such as DJ Khalid and Beyonce queueing up to enlist their production wizardry, this duo’s Indonesian debut is set to be a one-of-a-kind performance. Another first-timer to descend on the Indonesian capital is British-born multi-instrumentalist and producer, SG Lewis. Signed to the label that made a global success of Disclosure and Jessie Ware, SG is following in similar footsteps. With his music a delicate blend of hip-hop, soul, 80s disco, and electro, there’s something for everyone in his live show.

American singer-songwriter and The Strokes’ lead guitarist, Albert Hammond Jr., caps off the international additions. Revellers can look forward to his infectious indie-folk crossover sound, with hits like ‘In Transit’ and ‘Muted Beatings’ taken from his new LP Francis Trouble.

We The Fest has always prided itself on offering much more than just artist performances, and this year is no different with the return of the festival’s ‘Beyond The Music’ activations. Incorporating an Arts Village, Ismaya Food Town’s Eats & Beats food court, a Cinema Club and Carnifun games section, ticket-holders will be spoilt for choice when they want a break from the music.

For those that want to get up on stage themselves, WTF has launched a ‘Submit Your Music’ competition. In collaboration with Demajors Independent Music Industry, SAE Institute Jakarta and Mustang 88 FM, Ismaya are on the look out for Indonesia’s most exciting up-and-coming acts to perform at this year’s event. If you think you have what it takes then head to www.wethefest.com/submityourmusic. If watching is more your thing then there is now the ultimate in VIP experiences available, the ‘Cabana Banana’. Benefits include a free valet service, a private bar, food, and toilet area, access to an exclusive VIP viewing platform, exclusive merchandise, and of course your own private cabana furnished with comfy sofas and picnic areas. To find out more about the Cabana Banana experience, head to www.wethefest.com/cabana.

With tickets selling faster than in any previous years, and with new artists and activations still to be announced, fans are encouraged to get their tickets now to avoid disappointment.

Stay up to date with all new announcements via We The Fest’s socials.