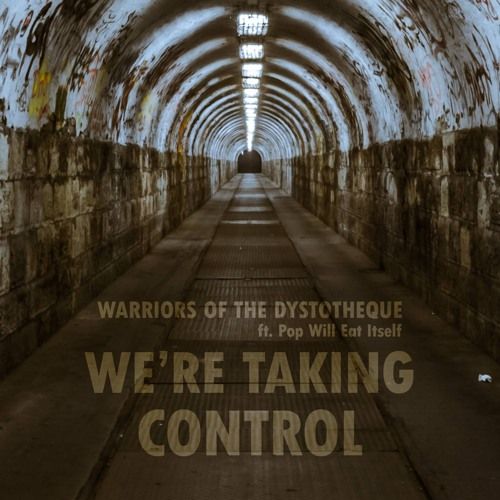 WotD step things up with their latest release, joining forces with the mighty Pop Will Eat Itself and drawing on their background in the early noughties that saw the rise of chemical breaks, squeaks & bleeps & played a major role in a decade of DJ shows at home & across the globe for two of the bands members..

Christened on the type of rebellious rocktronic music that made the late 90s such a great era to be part of, the Warriors have drawn on that spirit to sum up the social chaos and political discontent that has spewed out of the globe over the last 12 months. "We're Taking Control" has elements of anger, disorder, angst hope and guts as the world moves into an uncertain future. We're Taking Control is a vocal collaboration with Pop Will Eat Itself, known for a host of  hits like Wise Up Sucker, and the Prodigy collaboration, Their Law. PWEI take the track to the next level with their take on the turn of events.

B side Thou Shalt Not Follow is another message to the current governments and world leaders, and borrows the famous anti-authoritarian net meme "Go to work, get married…" and couples it to a distorted electronic rock track.

Remix wise Warriors of the Dystotheque have enrolled the services of the Acid Guru & Electronica legend Mr Justin Robertson, Justin was responsible for one of the 1st electronica outfits in Lionrock as well as making a name for himself as an international DJ for the best part of 25 years having graced the decks with the finest DJ's in the best clubs on the planet, and remaining at the cutting edge of the electronic scene. Sit back strap in & enjoy this Acid trip as he steps up as deadstock 33's.

Next up is Kalahara, who are Lydia Kaye and Lex Shellard.

After a guest vocal from Lydia on a previous project of Lex's the duo realised they both had a desire to create music on a deeper level that finally connects the dots & lets them express what they have always wanted to say.

By day Lex makes Film Trailer music for the likes of Marvel, Universal and Sony and is currently working with New Order on sound design for their forthcoming series of shows at Manchester Int. Festival – Lydia is a singer songwriter, writing toplines and songs for modern producer's like Howson's Groove to legends like Alison Moyet. Here they turn out a remix that contains "mild peril & slight darkness" something that would sit well alongside Bonobo's finest works.