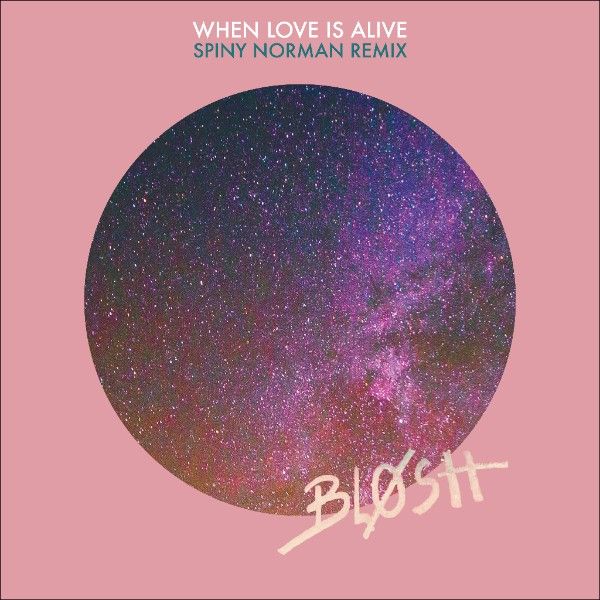 Free-spirited Norwegian/Spanish indie-pop duo BLØSH, are back with a Spiny Norman remix of ‘When Love Is Alive’ – their most popular track from the debut album ‘Keep Bleeding Keep Breathing’.

A veritable gem in its own right, ‘When Love Is Alive’ sees Spanish-born vocalist Teresa Bernabé's airy voice float above electrically-charged guitars and an unaffected beat. Bringing his high-octane fusion of electronica and psychedelia, the groovin’ Norwegian expertly injects animated percussion, spacious vocal effects and an array of energetic synth layers.

Spiny Norman, the underground DJ-producer from Oslo and namesake to Monty Python’s giant imaginary hedgehog, has released a host of tracks through ii(pause)in America and Sellout Music in Norway. The young electro aficionado derives clear inspiration from tech house and drum and bass when melding his own futuristic productions, resulting in a fresh palette of sounds for 2017.

Meanwhile BLØSH have amassed over 1,000,000 streams of their debut record following support from DIY, The 405 and Wonderland, as well as multiple spins from tastemakers across BBC Radio and a recent sync on MTV’s Teen Mum 2 for ‘When Love Is Alive’. It’s no wonder that the pop dynamos were recently included in the Eurosonic Breaking Borders Top 100 Chart, and by bolstering their repertoire with quality fresh takes of fan favourites – like this and Mentum’s recent remix of ‘Keep Your Tongue’ – the duo are certainly building anticipation around the possibility of new material to come.

At the forefront of Oslo’s indie-pop scene, this Scandinavian collaboration will see BLØSH delight fans and expand an already international fan base with Spiny Norman’s heart-warming remix of ‘When Love Is Alive’ – so let it in to your life and “love if you dare”.