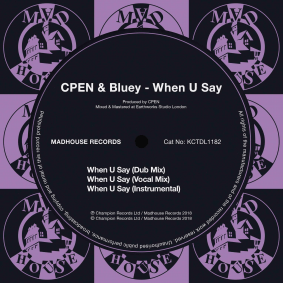 CPEN and Bluey Robinson return to Madhouse Records in late February as they reveal their latest single ‘When U Say’.

A firm fixture of the US deep house scene for almost two decades, West Coast talent Chris Penny aka CPEN has remained a name of note releasing music via the likes of Seasons Recordings and Memorabilia, whilst rising talent and vocalist Bluey Robinson made his impressive first foray into the scene last year having previously provided vocals across a range of genres from soul through to hip-hop and beyond. Following the release of their debut collaboration ‘I’m Searching’ on the label in 2018, re-visited by label boss Kerri Chandler in December as he delivered three fresh interpretations championed by the likes of The Black Madonna, Anja Schneider, Groove Armada and Catz ‘n Dogz, the pairing now delivers their latest collaboration ‘When U Say’ on the imprint to kick start 2019.

Opening the release, the Dub Mix of ‘When U Say’ sees Penny delve for a combination of classic organ leads amongst slick, skipping percussion, before releasing the soulful and infectious vocals of Bluey throughout the Vocal Mix. Last up, the focus is shifted solely to the music as the Instrumental rounds out the package in style.