Dave Till & Codice Vs Sunny Spinner & Junior Paes - Where Is The Love? 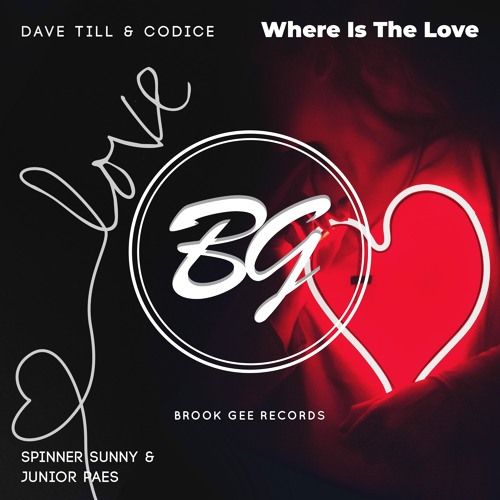 Dave Till & Codice Vs Sunny Spinner & Junior Paes - Where Is The Love?

Dave Till has collaborated with 3 highly talented artists: Codice, Spinner Sunny & Junior Paes, together creating an epic tune titled ‘Where Is The Love?’ The track builds from the very first beat with pretty melodies and complex drum patterns that dance in the background of the Sci-Fi style vocals. This powerful single featuring the four artists’ trademark sounds is sure to set any room with a dance floor on fire.

Dave Till is one of Belgium’s fastest growing Electronic music stars brought to light by the legends that are Dimitri Vegas and Like Mike. Dave has played some of the biggest events and festivals in the world such as Tomorrowland, Summer Festival and Super Sonic and his music has seen support from industry heavyweights such as Hardwell, Tiesto and Blasterjaxx to name a few. Not to mention releasing music on Spinnin’ Records, Smash The House and Mixmash, keep an eye on Dave Till as he is set to be a huge star.

Spinner Sunny has been on a roll the past year releasing some great remixes such as Selena Gomez’s ‘Fetish’ and Alan Walker’s ‘Tired’ showcasing his Progressive House and Future Bass style. Added to the mix is Codice, an 18 year old producer from Mumbai who has had support from Alpharock, TWIIG and Timmo Hendricks for his EDM/Big Room bangers! Last but not least the track features the vocals of Junior Paes, the Brazilian music maestro. We’re hoping this huge collab isn’t the last from these four!

‘Where Is The Love?’ Is out now on Brook Gee Records

Listen to ‘Where Is The Love?’