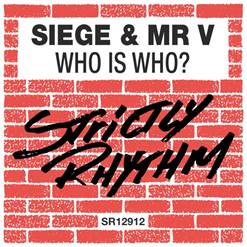 Who Is Who?  Siege & Mr. V is who: the New Yorker descended from the noble musical legacy of the Paradise Garage and the golden days of New York house, and the young upstart from Belgium, the small European nation with a big history of pioneering house and techno clubs, DJs and producers.  Siege has recently made his mark with remixes for Disciples, Planet Funk and Romanthony and his own tracks on Abode, Glasgow Underground and Exploited, while V’s talents as a producer and rapper cum vocalist are well established through big tracks like Jus Dance and Put Your Drink Down, and his Sole Channel imprint.

Who Is Who? is the fruit of this transatlantic meeting of minds as V explores a lyrical theme of identity independence over Siege’s soundscape of Moroder-style electronic funk (Main Mix) and shuffling tech beats (Club Mix).  Who Is Who?  Siege & Mr. V.