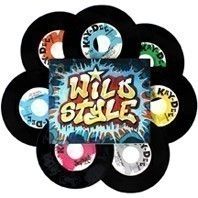 KAY-DEE RECORDS, the online store and label owned and operated by Kenny Dope, takes things to the next level with the debut of its “Book Series.”  Kenny’s vision for Kay-Dee’s first book was to create a premium set with a mix of well-known and never-before-seen “Wild Style” photos, in addition to liner notes detailing the stories behind the music of one of his favorite films.

Teaming up with GET ON DOWN, the record label and online boutique dedicated to presenting and celebrating music with unique packaging and exclusive extras, the two have come together to release this impressive and historically-significant musical trophy item: The Wild Style Breakbeats.

The Book features the following elements:

• 13 songs total, spread out over seven “big hole” 45s (each with a different label color)

• Extensive liner notes in a 28-page book (with text by author Brian Coleman), including dozens of images – from “Wild Style” director Charlie Ahearn, among other sources – as well as interviews with Fab 5 Freddy, Chris Stein and GrandWizzard Theodore

The year was 1981 and young, New York City-based filmmaker Charlie Ahearn was working on what would become one of the most important artifacts in the history of hip-hop music and culture: “Wild Style.” He was scraping by to fund his efforts, which were far from a surefire money-making enterprise. Hip-hop wasn’t even called “hip-hop” at the time, and it was still viewed as a fad, by both nationwide music listeners and a majority of the press.

But Ahearn and his indie film army knew that hip-hop wasn’t going away, and that it was only starting to grow. They had seen it in the parks and clubs. They had felt its power, and saw how it affected young people.

As Ahearn and his crew continued to film scenes from “Wild Style” (which starred graffiti writers Lee Quinones and Lady Pink, among many other hip-hop and “Downtown” luminaries of the day), they reached an interesting juncture: what music would DJs in the film use in the soon-to-be-legendary live performance scenes?

The director – making a visionary move more than a half-decade before any sampling or music clearance lawsuits would appear – decided that he wanted to control the music to be used in these scenes. They would create their own breakbeats, instead of using known cuts of the day; for instance, The Incredible Bongo Band’s “Apache” or James Brown’s “Funky Drummer.”

While Ahearn headed off to film more scenes, he left these important musical production duties to an up-and-comer who, thanks in part to his crucial role as Phade in the film, would grow to be one of hip-hop’s and graffiti’s most important ambassadors of the 1980s: Fred “Fab 5 Freddy” Brathwaite.

As journalist Brian Coleman recounts in the set’s liner notes:

This all sounds relatively straightforward, except for one thing: Freddy wasn’t a music producer. But he did have some funky friends to lean on. As it so happened, most of them came through the infamous NYC public-access show “TV Party,” launched in 1978 on Manhattan Cable by journalist and scenester Glenn O’Brien. Freddy was, in fact, the show’s cameraman. And in the show’s “Orchestra” – a term used facetiously by anyone involved – were Leonardo “Lenny Ferrari” Ferraro, a jazz-raised R & B drummer, Vietnam vet and recent NYC transplant from Pittsburgh; and guitarist and occasional co-host Chris Stein, from the band Blondie.

Over the course of a week’s time in the late summer of 1981, the Wild Style Breakbeats sessions were completed and mastered. None of the three principal musicians who played on the Breakbeats were ever in the studio at the same time. And the final number of white-label-only Breakbeats 12-inches was, according to Freddy, only 100, making them some of the rarest “Holy Grail” pieces of vinyl in music history.

The original Breakbeats vinyl was given to the DJs in the film – including GrandWizzard Theodore, Charlie Chase and Kevie Kev Rockwell – who used them in live performance scenes, most of which were completed in the spring of 1982. Interestingly, out of 13 Breakbeats given to DJs, only five were ever used in these performance scenes or on the film’s much-revered soundtrack.

As the liner notes conclude:

Freddy says, “The #1 question I would get when I would meet significant DJs from the ’90s was, ‘Where did those records come from?’ It was a big thing to a lot of people.” And he underscores an important parallel to the breaks that made up the backbone of the original ’70s Bronx park jams: “The kind of breakbeats that were popular in the early years sounded so obscure, even if you were a DJ, because jocks would soak the labels off so people couldn’t figure out what they were playing. The Wild Style Breakbeats became a similar quest.”

Chris Stein sums his “Wild Style” experience up, three decades later: “While the film was being made, I knew it was going somewhere, because I was really aware of what was going on in the hip-hop world back then. I can’t say I knew the full significance of what it would become at the beginning [of filming] and I definitely didn’t know that four years later I would have guys in the UK begging me for white labels of the Breakbeats. But when I finally saw the movie, I was really impressed. I told them ‘This is going to get knocked off by Hollywood immediately.’ Within six months, there was ‘Beat Street.'”

Drummer Lenny Ferrari says: “Charlie and Freddy had the vision. They knew hip-hop was becoming a revolution. Most people didn’t. I was just honored to be involved. That movie helped to bring hip-hop to the world.”

For this premium Wild Style Breakbeats set, renowned DJ, producer, and lifelong “Wild Style” fanatic Kenny Dope obtained the original reel-to-reel tapes from director Charlie Ahearn and went about re-EQing and extending the length of each Breakbeat [most were originally about one minute long]. Thanks to these efforts, all 13 Breakbeats are presented here with top-level audio quality that has never been heard before. Additionally, since only bootlegs of the Wild Style Breakbeats have ever existed, this is the first time they have ever been presented on their own, as an official full album release.

This stunning set with unique “Kay-Dee Casebook” packaging – officially licensed from Charlie Ahearn by Kenny Dope and Kay-Dee Records, and packaged by Get On Down – is a hip-hop junkie’s dream. It presents a crucial rap artifact with the respect it has always deserved but, until now, has not been given. It is sure to sit on your shelf alongside other trophies from the music and culture that has touched the lives of so many over the past four decades.